Several factors contribute to the broadening of a chromatographic band, occurring both inside and outside of the separation column. As described by Van Deemter in 1956, mechanisms inside the column include eddy, axial, and longitudinal diffusion of the solute molecules as they flow through the packing material, as well as the mass transfer of solutes into and out of the stationary phase.

Broadening outside the column is due to molecular diffusion, which happens from the point the molecules are injected until they are detected. Diffusion occurs in the internal volume of the injection system, as well as the detector, the connecting tubing, and any inline filter, guard column, or other devices present in the flow path. Collectively, the volume of these components is known as extra-column volume, VEC.

It is common to describe a chromatographic peak as an idealised Gaussian function, with retention time being the maximum of the curve, and peak width being measured by standard deviation. This mathematical description of the peak is convenient because it makes it possible to describe peak width (more precisely, retention time variance) as a sum of contributing factors:

An ideal chromatographic system would only exhibit minimal dispersion inside the column, and extra-column diffusion should be non-existent. This is impossible (at least with current technology!) so it is important to assess the extra-column volume and minimise it whenever possible. We know of at least three different methods to measure extra-column volume, which we describe here:

If such data is made available, one can refer to manufacturer specifications to find the internal volumes of the HPLC components that contribute to extra-column dispersion and add the individual contributions together. These components would include, but may not be limited to, injector needle seat, injection valve, capillary tubing, heat exchanger(s), detector flow cell, etc:

Unfortunately, it is sometimes difficult to obtain accurate volumes for some of these components, and it is also complicated to estimate the contribution of inline filters, frits, or less-than-perfect connections that may have small, undetected voids.

This method attempts to measure extra-column volume empirically. Disconnect the column from the system and replace it with a zero-dead volume (ZDV) union. Ensure that the pumping system is generating a constant and accurate flow, by monitoring the pressure, or measuring the flow rate with a measuring cylinder. If the flow rate is not constant, it may be necessary to add a restriction capillary of known internal volume.

Inject a small volume (1 – 2μL) of a UV-active compound (for instance, uracil) and measure the time delay between injection and the start of the peak: 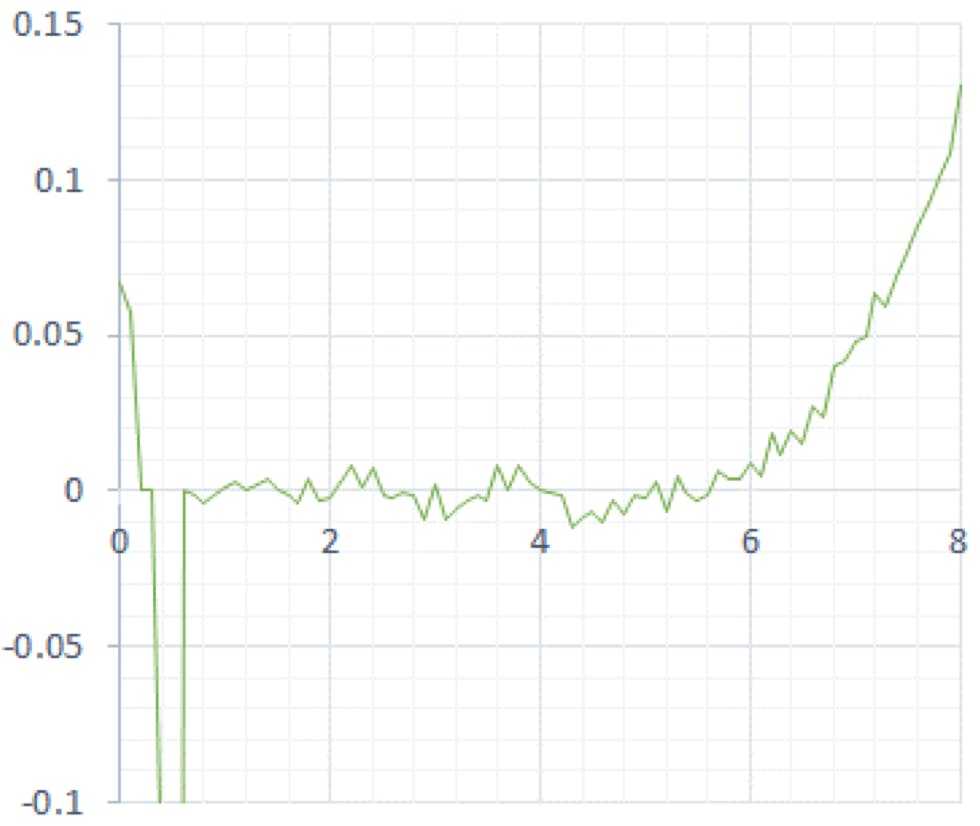 Multiplying the time delay by the flow rate gives the extra-column volume:

As can be seen in the example above, accurate measurements can be difficult due to baseline noise. It is therefore important to thoroughly equilibrate the system and ensure the baseline is free from pulsations for this method to be effective. If a restriction capillary is used, its internal volume must be subtracted to obtain the correct extra-column volume.

It is well known that peak width at the baseline, as defined by US Pharmacopoeia, is equal to four times the standard deviation of the ideal Gaussian peak. The following diagram, where the x-axis is given in standard deviations, illustrates this: 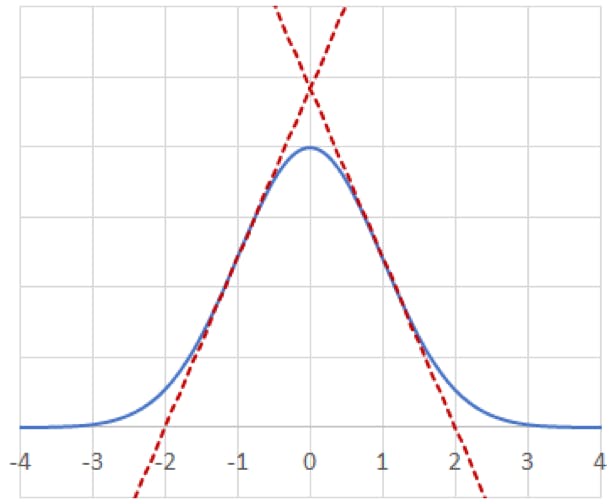 Hence, we can write:

And peak variance is the square of peak standard deviation:

This peak variance, as discussed above, includes intra-column and extra-column factors.

Let us begin by considering exclusively the column contributions (that is, peak dispersion in the absence of extra-column effects). This is described by column efficiency - or theoretical plates:

Combining this formula with total peak variance, derived above: 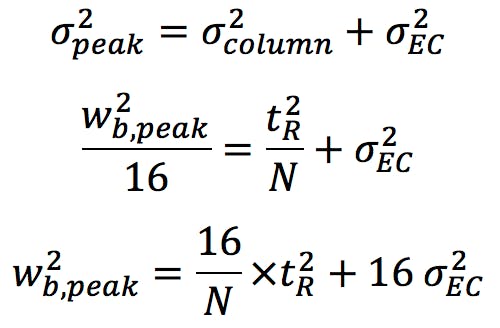 Intercept of the Regression

In isocratic separations, early eluting peaks tend to be very sharp, and wb increases with retention time. According to the equation we have derived above, plotting wb2 versus tR2 for an isocratic chromatogram should result in a straight line, with slope 16/N and intercept 16σEC2.

The standard deviation of the peak (in time units) is therefore:

And extra-column volume is obtained when we multiply σEC by the flow rate, hence the intercept provides an indirect measurement of extra-column dispersion:

Slope of the Regression

Since slope = 16/N, we also have a mechanism to calculate ideal column efficiency in isocratic conditions, and in the absence of extra-column dispersion:

The following results were obtained from the isocratic separation (water: ACN 40:60, 0.5 mL/min) of a pharmaceutical formulation on an Inertsil ODS-2, 5μm 2 × 100mm column:

The regression of wb2 on tR2 is shown below: 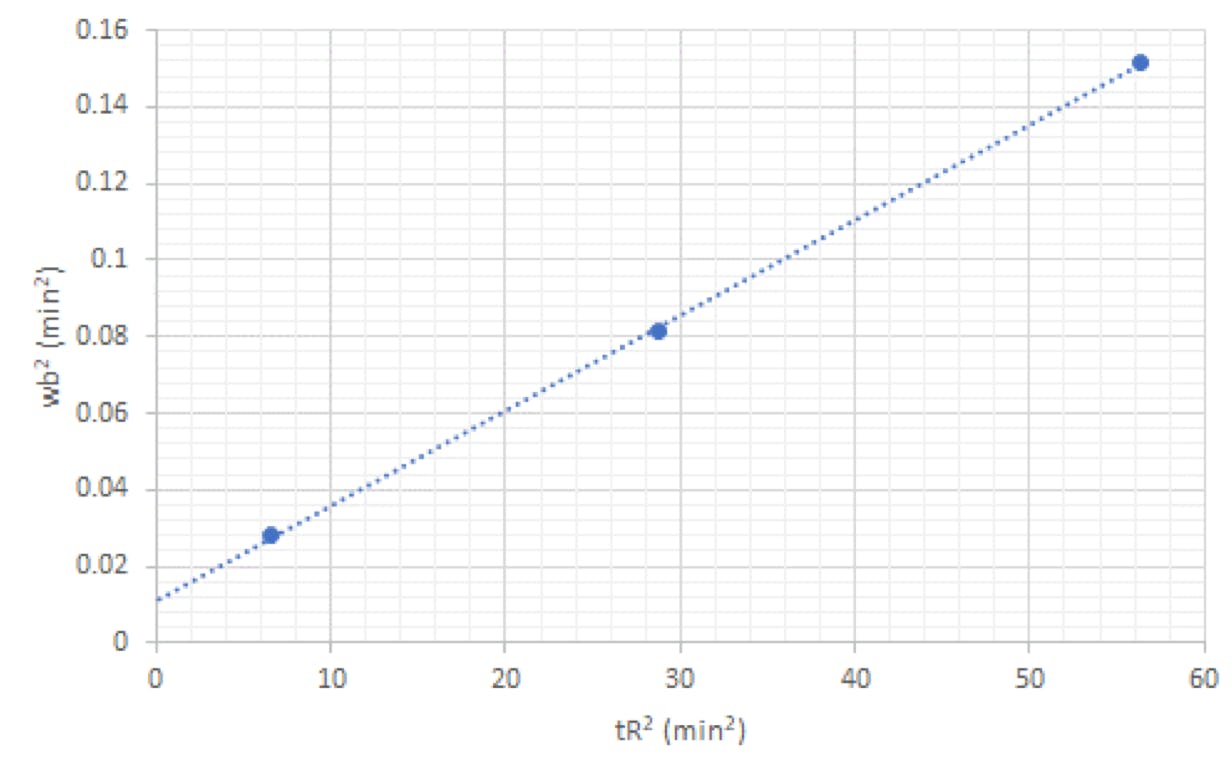 Looking at the regression line, it is apparent why the intercept is equal to 16σEC2: effectively, we are extrapolating peak dispersion to zero retention, in other words, in the absence of a column!

Multiplying this standard deviation by the method flow rate, we obtain the estimated extra-column volume of the chromatographic system:

On the other hand, the slope of the regression line is equal to 16/N, and we can calculate theoretical plates in the absence of extra-column distortions by rearrangement:

Comparing this theoretical figure to the actual plates measured for each peak, we can see that extra-column dispersion has the unwanted effect of reducing the apparent efficiency of the column:

The loss of efficiency is more pronounced for early eluting peaks. Given that these substances spend less time in the column, it follows that extra-column dispersion must be highly significant compared to in-column dispersion.

The following chromatogram was obtained from a standard organic mixture (1 μg/mL each) injected on a Hypersil ODS 5μm 4.6 × 125 mm column, in isocratic mode (water/methanol 20:80) at 1 mL/min: 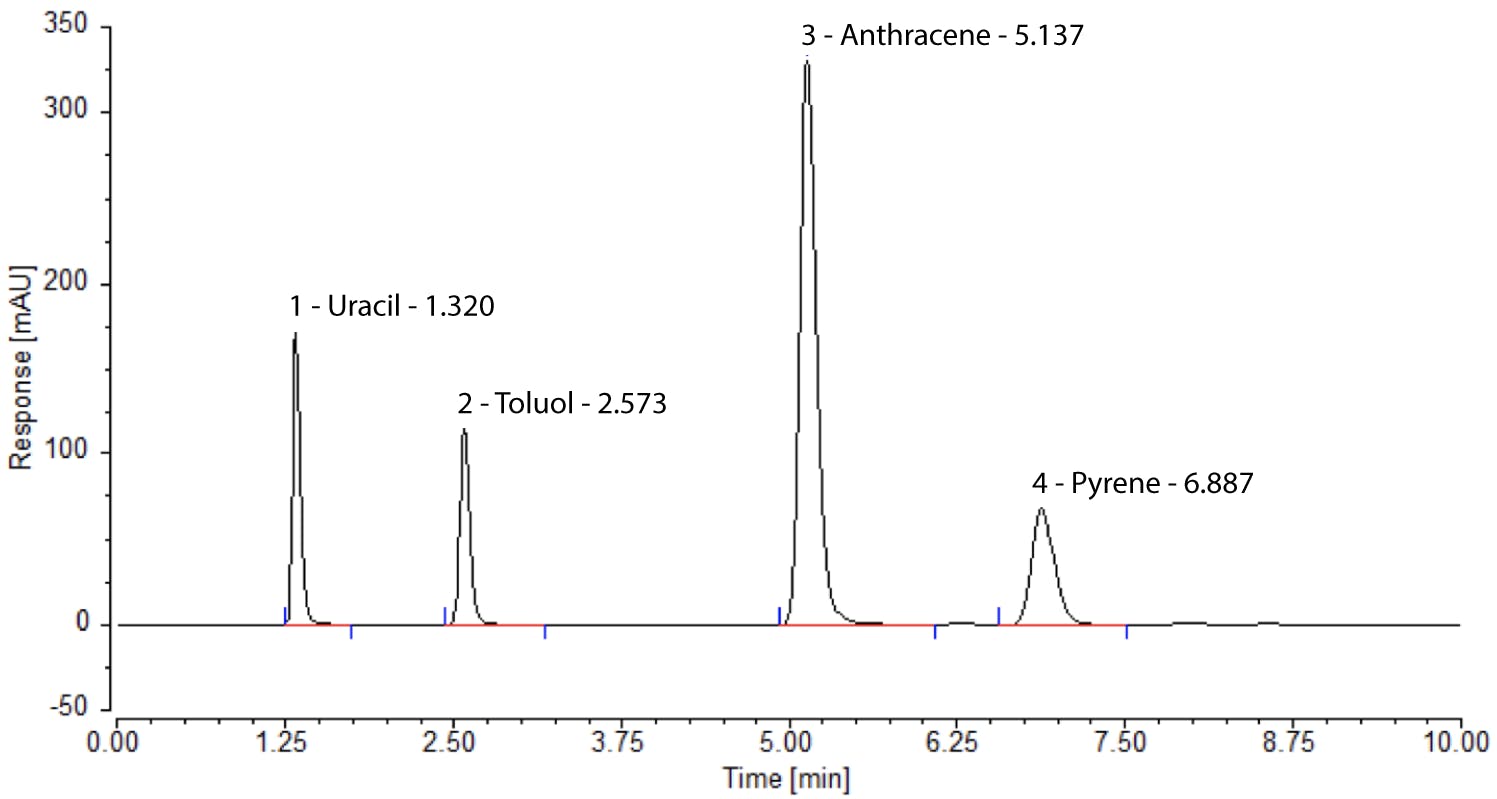 The regression of wb2 over tR2 yields the following results: 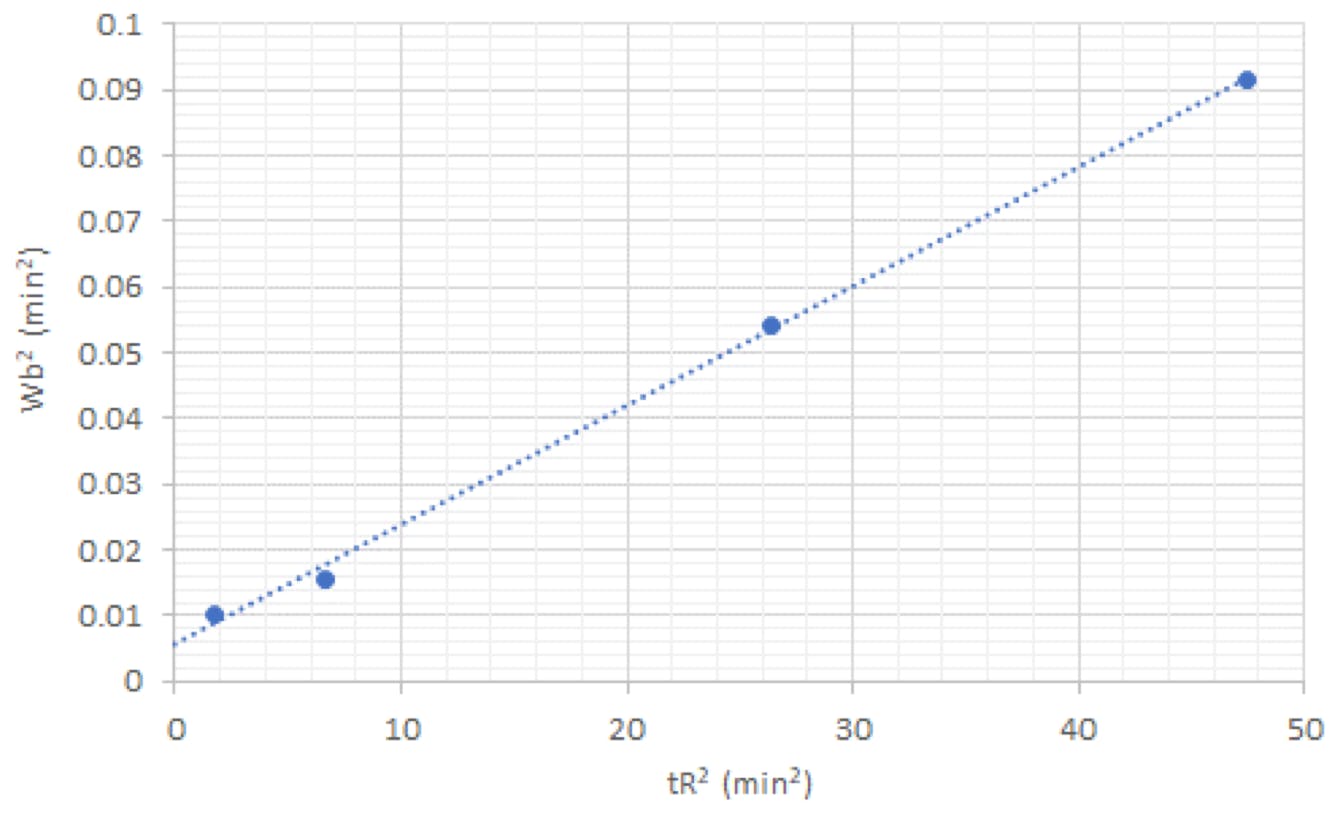 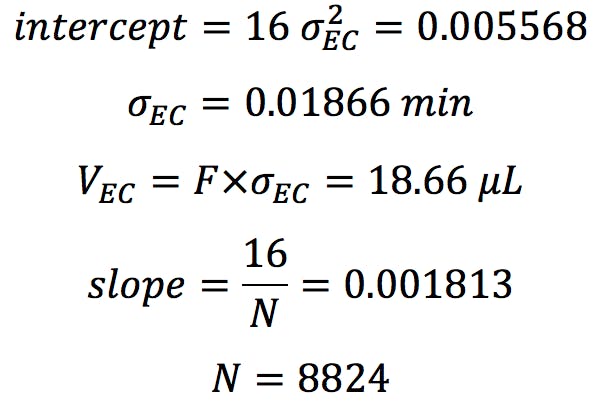 Uracil shows a staggering loss in efficiency. This is not surprising if we consider that this compound is practically unretained on ODS stationary phases. It should experience little dispersion while passing through the column, whereas extra-column diffusion would be by far the greatest contributor to peak broadening.

Toluol has also experienced a significant drop in efficiency, whilst pyrene practically yields ideal “column-only” theoretical plates: pyrene is strongly retained and it is reasonable to assume that most of the peak broadening occurs inside the column.

The observation that plate count for early eluting peaks is substantially lower than plate count for late eluting solutes is a strong indication that the system has excessive extra-column volume and corrective measures should be taken. These could include replacing a large flow cell for one with a smaller internal volume; replacing sample loop, needle and needle seat for low dispersion versions, and using capillary tubing with a smaller internal diameter.

Example 1 shows that extra-column dispersion is especially critical when using columns of small internal diameters, where we would expect relatively low in-column radial diffusion. Longitudinal diffusion should also be reduced in short columns when compared to longer columns.

HPLC hardware (injection system components, tubing, guard columns, flow cells…) that would be appropriate for a traditional 5μm 4.6 × 250 mm column can significantly compromise the efficiency of a modern 1.9μm 2.1 × 50 mm column. It is therefore not surprising to note the differences in specifications between a traditional HPLC system and a UHPLC instrument that has been optimised to take advantage of these columns.

Injection volumes should also be kept to a minimum, as a large sample solvent volume can significantly distort peak shape, especially if the solvent is stronger than the mobile phase.

It is also important to mention the contribution that detector settings -such as data acquisition rate and time constant- can have on peak distortion, despite the obvious fact that these instrument parameters have nothing to do with extra-column volume. A slow data acquisition rate may be perfectly appropriate for a large column packed with 5μm particles, but will artificially broaden the peaks that a state of the art column packed with sub-2 micron or SPP (superficially porous particles) should be able to generate. Consequently, collection rate and time constant should be optimised alongside flow cell volume, capillary dimensions, etc. to take full advantage of new super-efficient columns.

Finally, in gradient methods only post-column extra-column volume is generally of concern. This is because sample focusing can be used to neutralise any peak broadening that may occur between the injector and the column head.

A Note About Gradients

Method 3 cannot be used to estimate extra-column dispersion under gradient conditions, because gradients tend to reduce peak widths across the chromatogram due to eluent strength differential, and this distorts the wb2 vs. tR2 relation. As an example, consider the following fast gradient separation of sweeteners by RPLC, performed on an Acclaim 120 C8 3μm 2.1 × 50 mm on an Ultimate 3000 UHPLC system with approx. 90μL dwell volume: 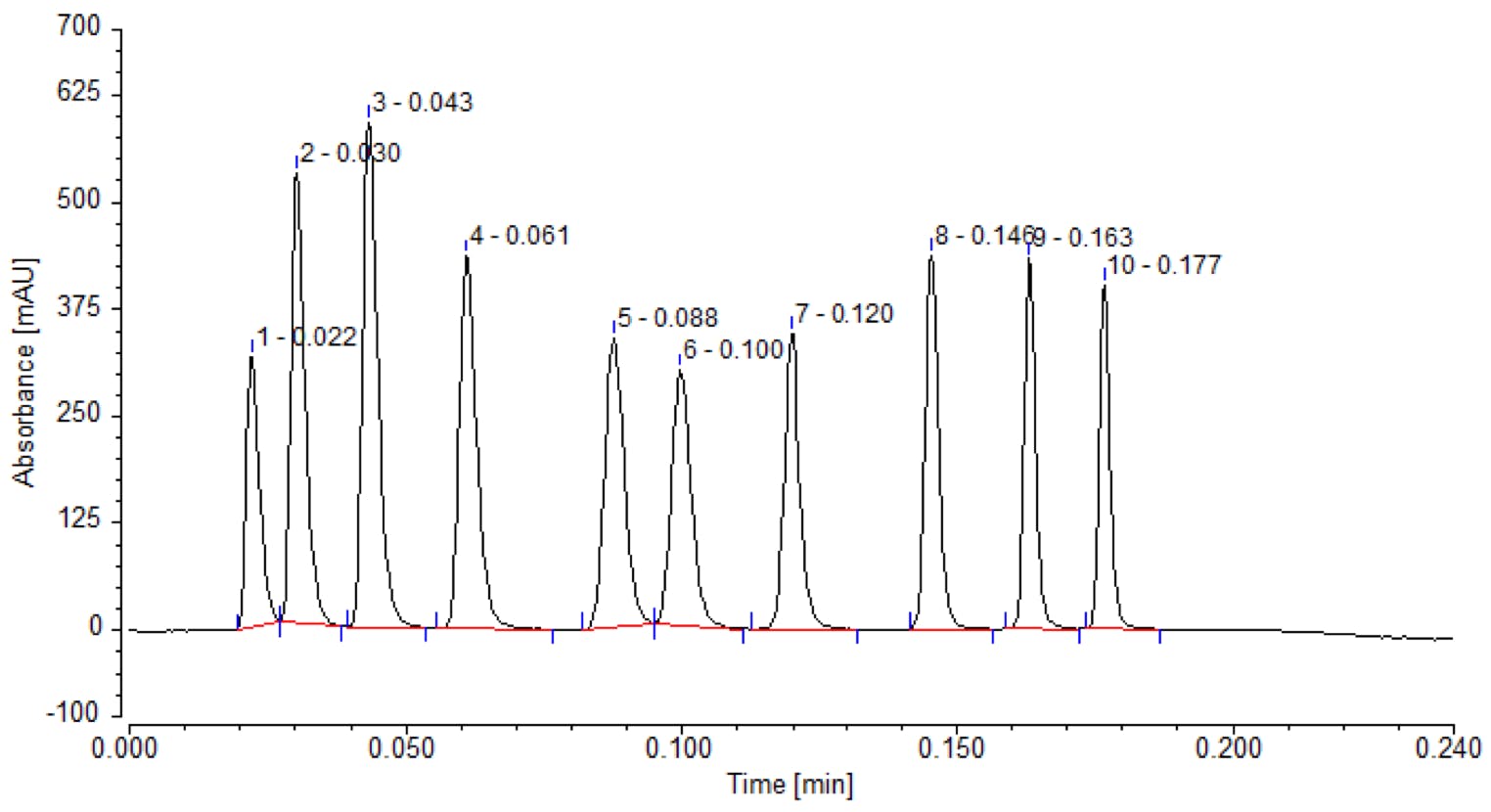 The plot of wb2 over tR2 is shown below: 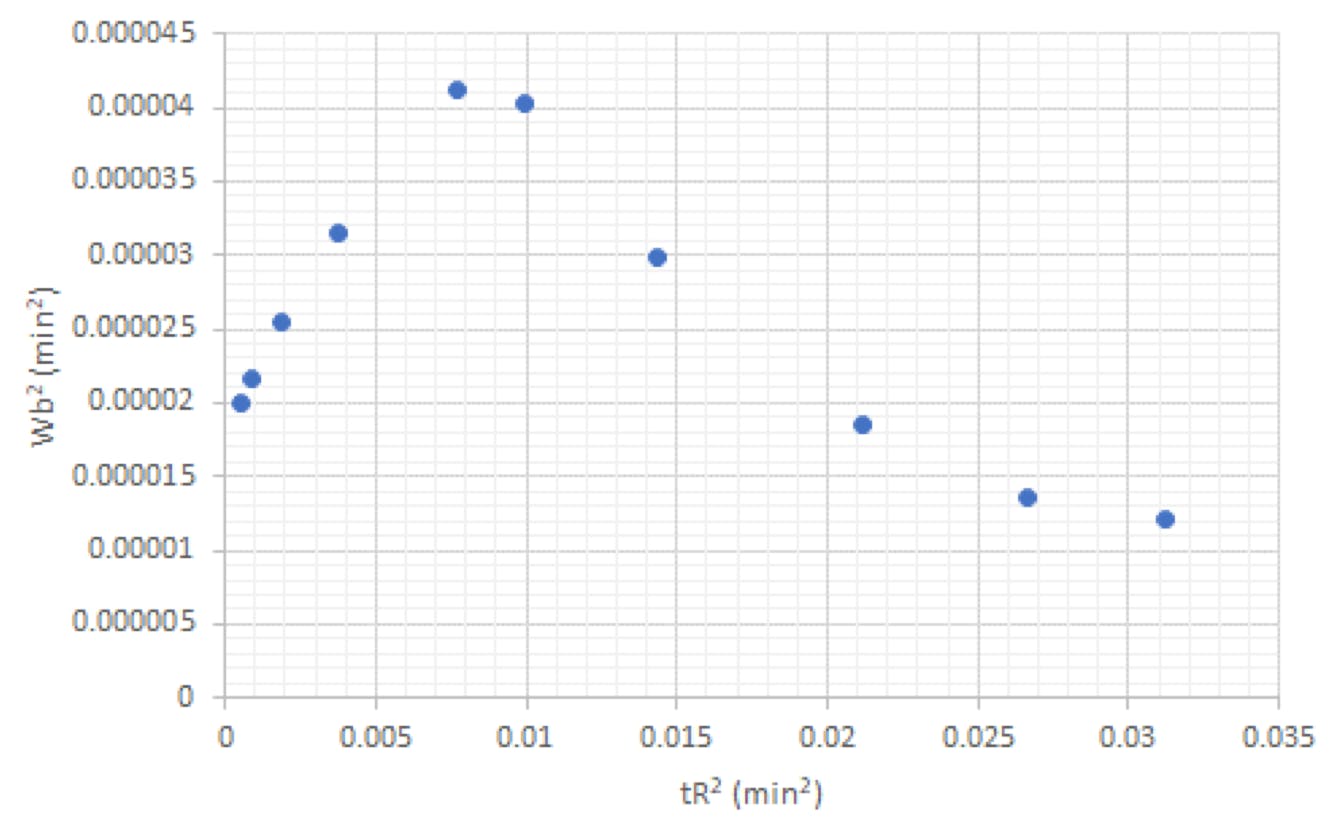 Due to the delay introduced by instrument dwell volume, peaks 1 – 5 are effectively separated in isocratic (40% B) conditions, whereas peaks 6 – 10 elute on the gradient slope. The reduction in peak dispersion caused by the gradient is very striking. Only the first five peaks can be used to estimate extra-column volume:

A comparison of this figure with the theoretical plates obtained from the chromatogram reveals, as in previous examples, a dramatic loss in efficiency for early eluting peaks (mostly caused, perhaps, by pre-column dispersion?); but it also illustrates the spectacular increase in chromatographic efficiency one can obtain under gradient conditions, as compared to isocratic elution.