I think its fair to say that there has been a paradigm change in the way we approach mobile phase design for HPLC in recent years.  The trends are for more simple linear binary gradients with fewer additives (buffers, sacrificial bases, exotic pH adjusting reagents) linked in part to an improvement in column stationary phase design, the requirements for volatile buffers to allow API-MS detector compatibility, but also closely aligned to the requirements for the inherent robustness that accompanies more straightforward eluent systems.

Whilst the new mobile phases, including 0.1% TFA, 0.1% formic acid and 10mM ammonia, certainly deliver improvements, we are still missing several tricks to further improve the quality of the chromatographic output that can be achieved via the use of the simpler eluent systems.

I often see chromatograms with sloping, noisy baselines and sub-optimal sensitivity for separations which use these more straightforward eluents and what follows are some key tips in order to make the very best use of these ‘new’ approaches to eluent design.

Firstly, for those who are developing new HPLC methods, it’s important to realise that for certain separations, the ionic strength of the mobile phase can alter the selectivity obtained and tis will not only depend upon the analyte chemistry but also on the nature of the bonded phase and silica substrate.  In short, any column screening process that is undertaken, may be confounded by secondary ionic strength gradients (higher to lower ionic strength) that occur when the ‘buffer’ is added to the aqueous component (Mobile Phase A) only.

Figure 1 shows the difference in selectivity obtained in an isocratic separation when the buffer strength is altered. 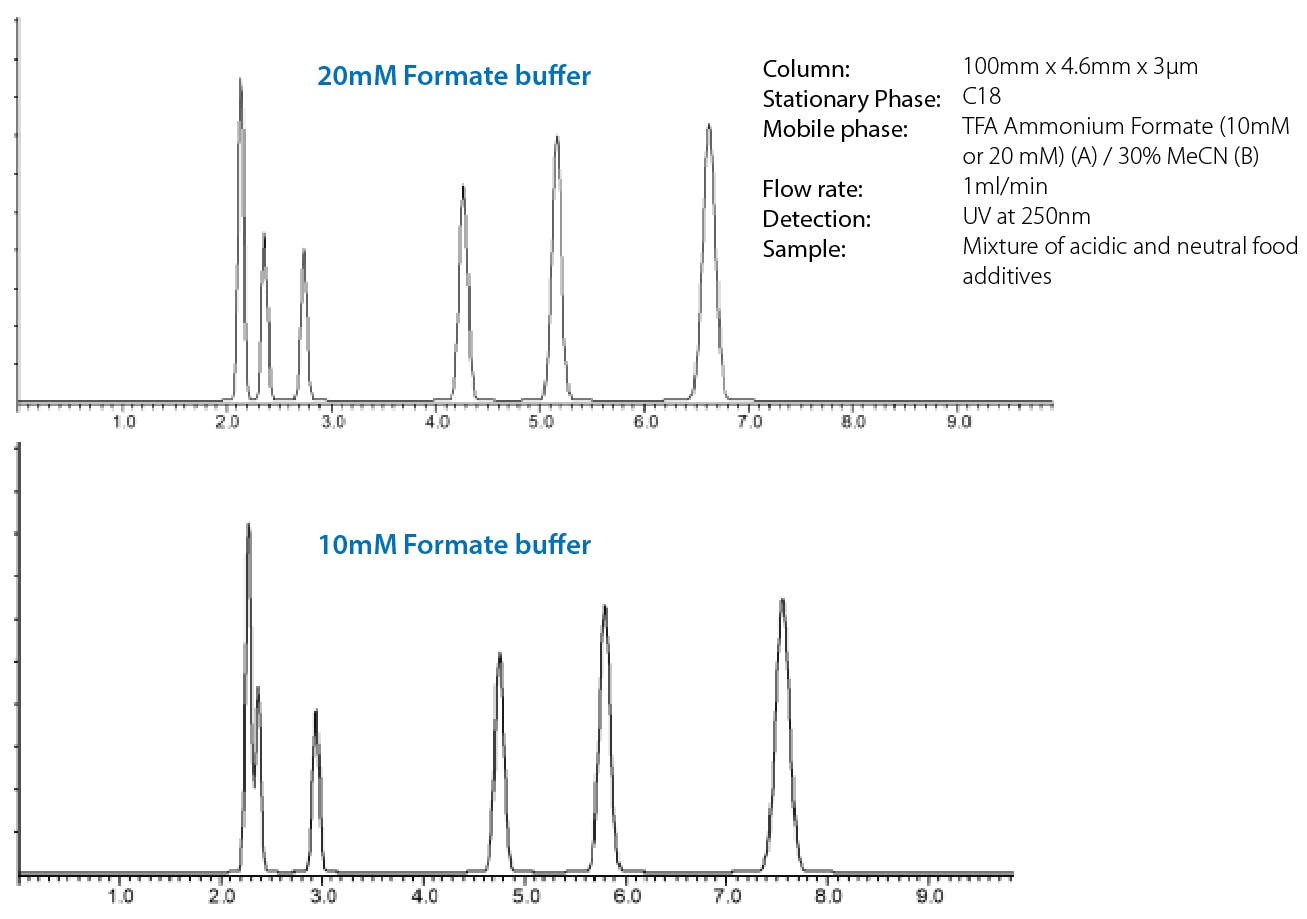 It should be noted that both separations in Figure 1 are carried out at exactly the same pH, the only difference in the two separations is the concentration of the Ammonium Acetate Buffer.

It is also important to note that when altering eluent ionic strength, the magnitude of selectivity changes will depend upon the nature of the interactions between the analyte and the bonded phase ligand or stationary phase surface.  Just to re-iterate that during method development, when column selectivity is being evaluated, its important to ensure that the results are not confounded due to variability arising from susceptibility to changing ionic strength. 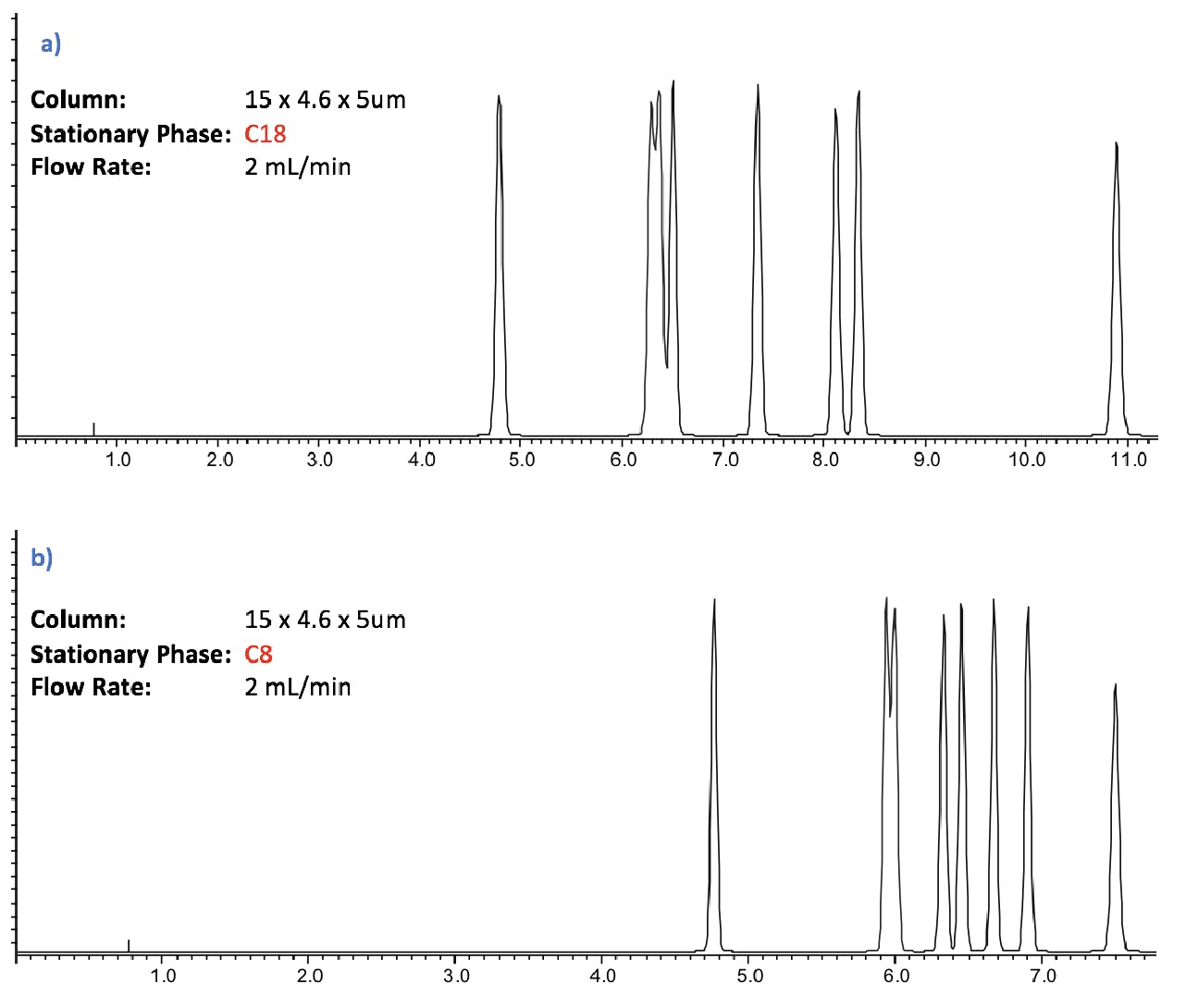 Separations a) and b) Gradient Table (variable ionic strength) 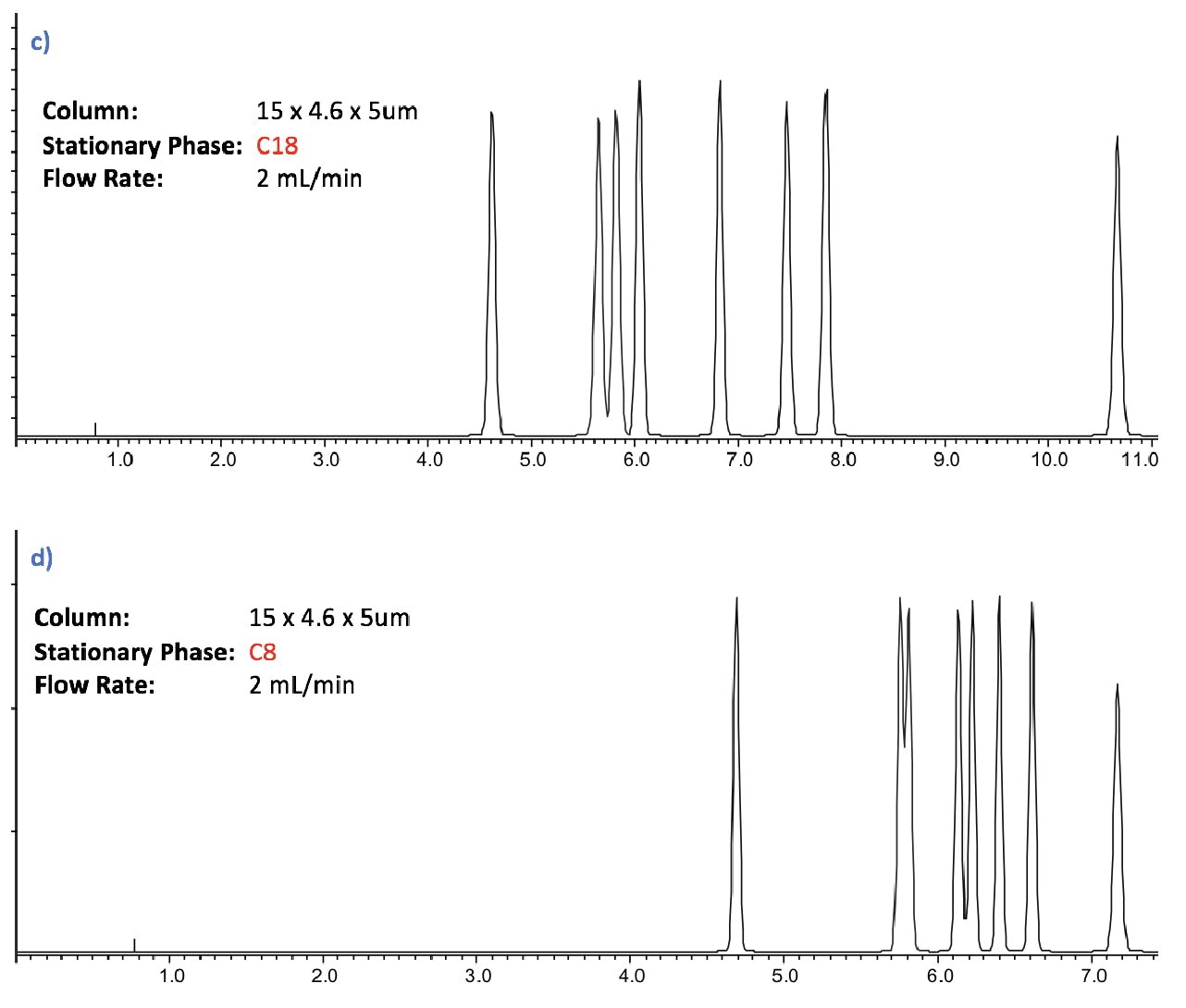 From Figure 2 it is clear that there are some marked differences in the selectivity between the ionic strength gradient separations (a,b) and the constant ionic strength separations (c,d).  It is also worthy of note that the constant ionic strength is easy to achieve using a simple ternary gradient.  Whilst some QC laboratories prefer to use binary pumping equipment due to perceived improvements in reproducibility and simplicity of transfer between different instrument types, in my experience, with only a little care, the use of a quaternary pumping system can be just as robust, repeatable and transferable as a gradient system.

It is also worthy of note that the differences between the selectivity in variable and constant ionic strength methods are more obvious for the C18 than the C8 phase.

Figure 2e) indicates that there is also a change in selectivity when the pH of the mobile phase is held constant during the gradient, again achieved through the use of a ternary gradient in which the third eluent component (Mobile Phase C) contains not only the buffer but also TFA in the correct proportions to achieve the desired (constant) mobile phase pH and ionic strength during the gradient.  In this way, any selectivity differences due to the analyte / stationary interactions are more easily interpreted compared to the situation in which both eluent pH and ionic strength vary over the course of the gradient.

However, the advantages gained using this approach are not limited to the method development laboratory or column screening procedures.  Methods designed with this approach in mind tend to be more robust and have flatter, less noisy baselines.  This illustrated in Figure 3 which shows the use of balanced buffer approach rather than a ternary gradient as described previously.  Further, rather than simply matching the additive concentration in both eluent components (i.e. 0.1% TFA in both aqueous and organic), the user has balanced the UV absorbance between the phases and adjusted the concentrations according – i.e. 0.1% TFA (aq) and 0.03% TFA in Acetonitrile produce the same UV response.  In this the flattest possible baselines are ensured during the gradient. 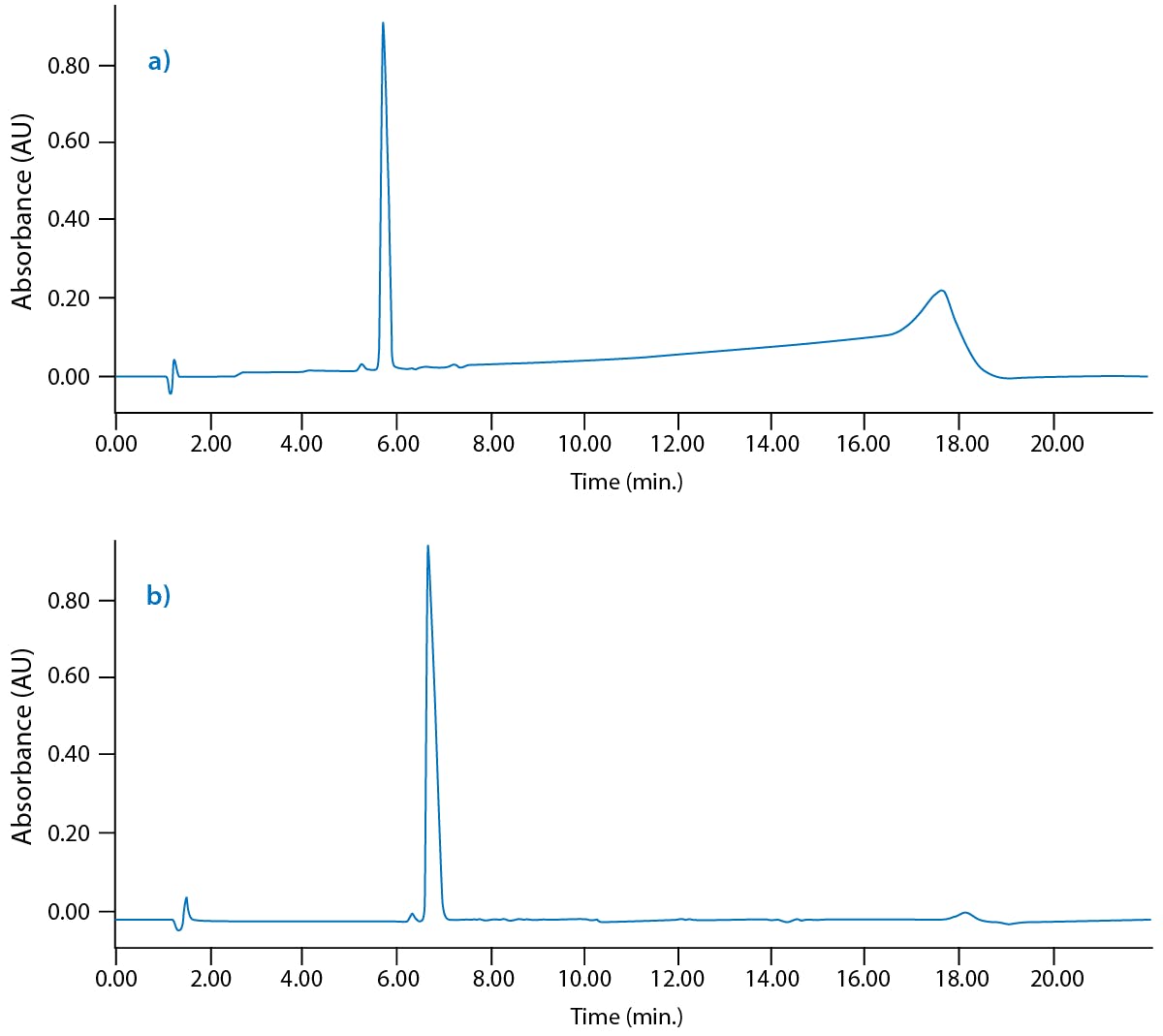 Of course, one should always bear in mind that at higher UV wavelengths, baseline disturbances due to additives such as TFA and other volatile additives, have a lessened effect as their absorbance reduces and effects on the refractive index of the solvent become less significant.  Further, one might consider the use of a reference wavelength to assist in overcoming baseline drift effects when using diode array detector and further information on these topics can be found in Reference 2.

When using TFA as a mobile phase additive, and working at relatively low wavelengths in order to obtain the required sensitivity for non-aromatic and/or non-conjugated analytes, we are able to take advantage of the rather peculiar absorbance characteristics of TFA, which are outlined in Figure 4. 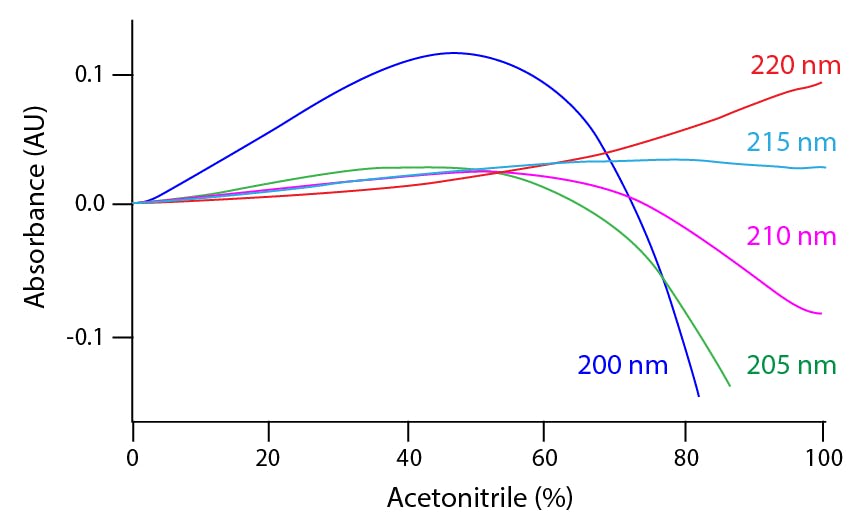 One can see from Figure 4 that at 215nm, as opposed to slightly higher or lower wavelengths, TFA shows a particularly flat response in terms of changing absorbance with increasing acetonitrile.  Therefore, working at 215nm may present a significant advantage in terms of reduction of baseline drift during gradient analysis.