As we know, chromatography is the separation of analytes from a mixture using;

Analytes will have different chemical affinity for each of the phases, those with less affinity for the stationary phase will elute earlier and those with a greater affinity will elute later and hence separation will be achieved.  The solvents used for the mobile phase, and the ratio in which they are used, can be tuned to change the relative analyte affinity and hence the retention time and selectivity (chemical separating power) of the separation.

In this article, we will look at mobile phase solvent preparation, solvent choices, the effect of solvent polarity on HPLC separations and solvent purity for various retention modes.

In order to predict or to anticipate the elution order of our analytes, we need to know the type of chromatographic column we are using, and the polarity of the mobile phase solvents relative to that of the analyte species.

It is commonly necessary, in order to achieve the desired/required separation, to use a mixture of mobile phase solvents and the first rule is that these solvents MUST be miscible. Solvent miscibility charts can be used to determine if two solvents are miscible (Figure 1). 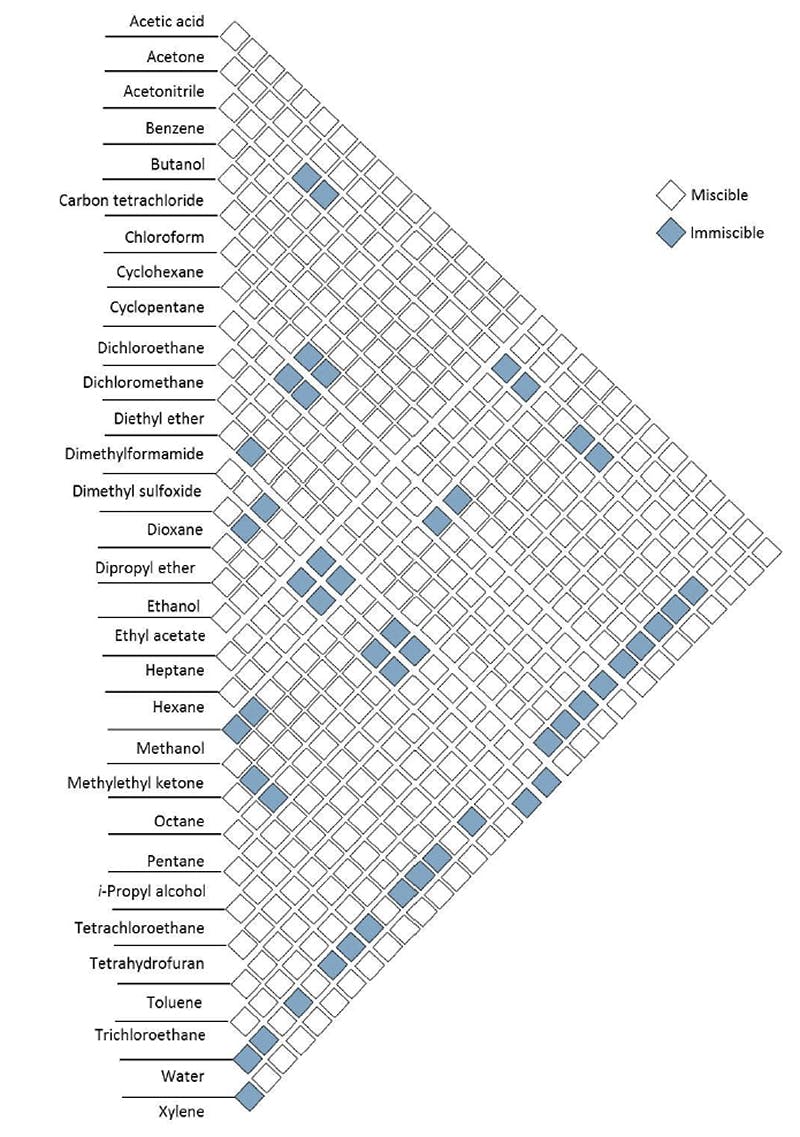 Download a full size pdf of this Solvent miscibility chart >

There are many factors which control the ‘separating power’ (usually called selectivity) of the chromatographic system, and include the nature of the mobile phase solvents, the mobile phase pH and the nature and ionic strength of any buffers used.  In reversed phase HPLC, for example, users would typically select acetonitrile or methanol (or mixtures of both) with water as the other major mobile phase constituent. Methanol and acetonitrile have fundamentally different properties in terms of dipole moment, acidity and basicity and therefore will produce separations whose separating power are different.  By mixing different proportions of these solvents or by using different gradient profiles, the selectivity of a separation may be ‘tuned’ to produce the best resolution between the analytes.  In reversed phase HPLC the amount of organic solvent relative to the aqueous component is typically low or begins low and then rises during a gradient separation.  In Hydrophilic Interaction chromatography (HILIC) the reverse is true.  In normal phase chromatography, two organic solvents are used, one of which has a higher chemical affinity for the stationary phase than the other and is therefore used to displace analytes and acts like the organic modifier in reversed phase chromatography.  Choosing the correct solvent and obtaining the correct proportion of solvents is a key skill in HPLC method development.

The next important factor to consider is how the solvent will be pumped and possibly mixed within the system. Binary and quaternary pumps both have advantages and disadvantages but are required to accurately mix the different mobile phase solvents in a reproducible fashion.  Online mixing of solvents in a constant (fixed) ratio during the entire analysis is known as Isocratic separation mode.  Where one solvent is increased in proportion to another over a pre-defined time range, this is known as Gradient HPLC and again we need pumps capable of accurate mixing or proportioning on the fly.

Binary pumps use 2 separate pump heads (effectively two separate and independent pumps) and a mixing chamber in order to deliver fast, efficient and low dwell volume flow in your system but can only deliver 2 solvents at a time and they are also more expensive.

Quaternary pumps are more versatile as they can operate up to 4 solvents in different proportions during a gradient but only use one pump and proportioning valves in order to achieve this. The result could be a slightly less accurate mixture proportion than binary system.

One further issue to consider in chromatography is the potential for dissolved gases in the mobile phase which may accumulate in the pump, column or detector, giving rise to fluctuating baselines and unstable pressure.

There are various things you can do to remove these such as:

To protect the HPLC system and your column from particulate matter, manufacturers recommend filtering of mobile phases prior to use. This task can be accomplished with simple vacuum filtration devices purchased through HPLC supply catalogs. Add all buffers and modifiers prior to filtration. A vacuum is applied to pull the solvent through a filter –which also acts to simultaneously degas the mobile phase. Handle filters with tweezers and make certain the filtration apparatus is always clean. Nylon 66 is a good filter material for aqueous mobile phases, while PTFE is an excellent filter for most organic solvents. Inorganic membranes are resistant to chemical degradation from a wide range of HPLC solvents. Be aware that Teflon filters cannot be used with water due to the material’s nonpolar characteristics. HPLC mobile phase filters have a pore size of around 4.5 microns.

The requirement for filtration of HPLC mobile phases is always a hotly debated topic. Yes, it would remove physical particles, but you are risking contaminating your mobile phase through particulates on the filter or the surface of the glassware used, also potentially altering the pH through evaporation of volatile pH adjusting additives (trifluoroacetic acid for example is volatile and can be lost to the atmosphere under vacuum filtration conditions).

Mobile Phase preparation can be divided into the following major Steps:

Most mobile phases are a mixture of at least two solvents. The volume of each solvent should be measured independently, and pH adjustment and additives added to the aqueous component PRIOR to combining the solvents. This avoids problems associated with volume change on mixing certain solvents – a 60:40 mix of water:methanol (v:v) may be incorrect by up to 10% due to latent heat of mixing affecting the overall volume of the mixed solution. Mixing is often carried out on-line by the HPC system – this tends to overcome the problems when pre-mixing mobile phase components, but this requires the use of more expensive binary or quaternary pumps as described above. When using buffers in gradient analysis make sure they are entirely soluble in the full range of expected mobile phase compositions. Less soluble buffers may precipitate as the organic strength of the mobile phase is increased – mobile phases containing more than 60% acetonitrile are particularly renowned for this phenomenon.

Companies such as ROMIL have long provided an optional service whereby ready-to-use solvent mixtures are manufactured to customer specifications. Such a service finds favor in Quality Control departments for example, where methods are established on defined mixtures and which must be prepared frequently orin large volumes.  Solvents which are manufactured by a supplier can typically be controlled to a set purity specification and tested to ensure that each batch of solvent meets the required purity specifications.

The purity of the solvent is extremely important as it can affect the achievable sensitivity of the analysis. A less pure solvent can cause an increased level of baseline noise, as well as ghost peaks. It is recommended that HPLC Grade (ROMIL SpS) or better solvents are used. Gradient grade solvents are much less likely to produce ghost peaks when using UV detection.  For MS detection, which is particularly susceptible to solvent impurities, which change the dielectric constant of the mobile phase and hence the MS detector response especially when using Electrospray ionization mode, ‘MS Grade’ solvents (such as the ROMIL UpS product line, should be chosen for optimum sensitivity and to avoid insidious effects such as ion suppression.

In our experience reagent quality should be matched across the individual components of a mixture, including all solvents buffers and additives. Otherwise, the quality and achievable sensitivity is determined by the least pure constituent.

These principles should also be strictly applied to any aqueous solvents used in the HPLC mobile phase and it is often the case that the quality of the in-house produced water is not sufficiently controlled to maintain the quality of the eluent and this can result in wasted time tracking the source of ghost peaks and failed batches of sample analysis.

That is not to say that commercial laboratory water purifiers cannot produce the highest quality water. They can. But to do that reliably not only requires the investment in the purification equipment itself, but also an on-going system of regular maintenance and strict quality control of the output.

Solvent manufacturers will typically also supply a range of water for HPLC analysis in order to assure the end user of the quality of all reagents used for mobile phase preparation.

When choosing your solvents, you also have to consider the UV absorbance of the solvents as this can vary from one type to another, depending upon the nature and concentration of solvent impurities.

Here are some examples of UV absorbance cut-off for a range of common HPLC solvents:

By working above the solvent cut-off and setting up the detector acquisition properties correctly, one can avoid issues such as rising baselines during analysis and/or reduced detector sensitivity.

In addition, when lower grade solvents are used, increased absorbance from the impurities contained within the solvents or solvent containers will results in reduced analytical performance which may manifest as compromised method reproducibility and reduced sensitivity.

Lower viscosity solvents will in general give narrower peaks due to improved mass transfer of analyte in the mobile phase. Viscosity is also important when considering system backpressure. The more viscous the solvent the higher the system backpressure.

Important in preparative HPLC. A solvent with a low boiling point will be easier to remove (by evaporation) from the sample.