Glycoproteins are proteins that contain complex polysaccharide chains, called glycans, bonded to their structure. The presence of glycans increases the solubility hydrophilicity or the protein, and affects its specific tertiary structure. Glycoproteins have a wide range of functions in the organism: certain hormones (EPO, HCG), immunoglobulins (antibodies), thrombin, prothrombin, fibrinogen, collagen or mucins are all glycoproteins.

Glycans affect the biological activity, stability, clearance, immunogenicity, and pharmacokinetics of therapeutic glycoproteins. Not surprisingly, one of the most important critical quality attributes (CQA) for biologicals such as monoclonal antibodies (mAbs) is glycosylation: determining the presence, number, and identity of glycan structures attached to the protein.

The most important class of glycans, called N-linked glycans, are covalently bonded to the amidic side chain of asparagine amino acids; specifically those in a “Asn-X-Ser” or a “Asn-X-Thr” sequence, where X is any amino acid except proline. In human IgG, this amino acid is asparagine 297 (Asn297). 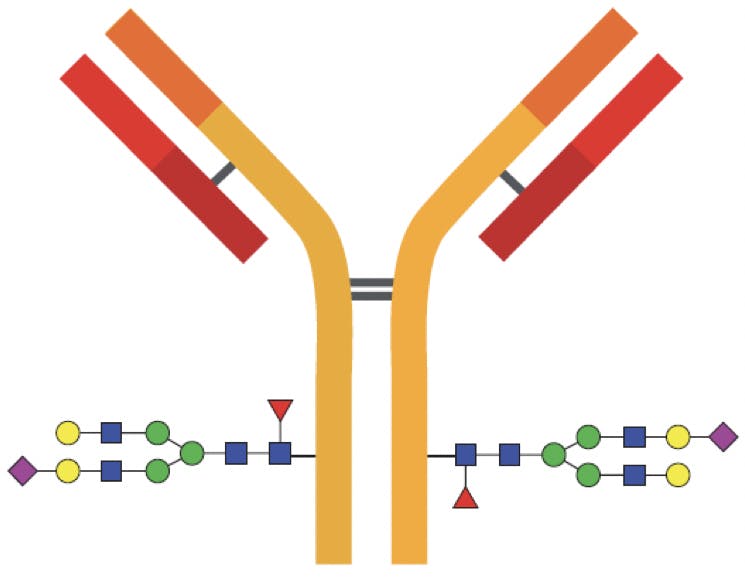 Figure 1: Diagram of an IgG indicating the most common glycosylation sites on the Fc region. In some cases the Fab regions are also glycosylated.

Some glycoproteins have a different class of glycans, named O-linked glycans because they are bound to the hydroxyl groups of serine or threonine through an O-glycosidic bond. O-glycans can be found in the Fab region of certain antibodies, but their structures are less predictable than N-glycans and their characterisation requires a unique workflow.

Glycans are complex, highly branched structures of monosaccharides. The most common monosaccharides are N-acetylglucosamine, mannose, galactose, fucose and sialic acids: 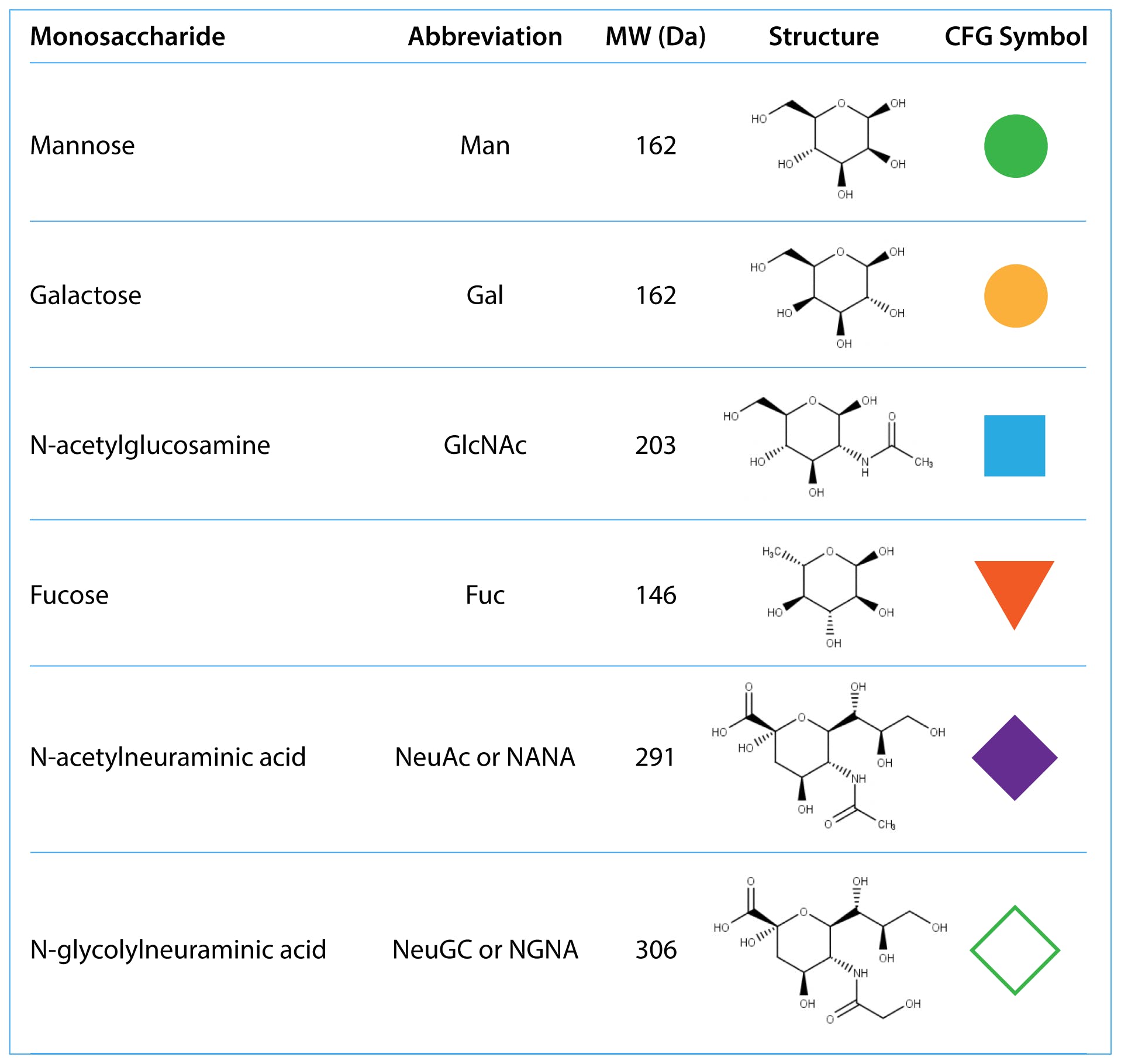 All N-linked glycans have a common core structure, a pentasaccharide constituted by two N-acetylglucosamine (GlcNAc), called the chitobiose core, and three mannose (Man) in the following arrangement:

The terminal GlcNAc is bonded to the Asn residue on the protein through the N-glycosidic bond.

Additional branches can be attached to the mannose monosaccharides, resulting in complex structures. Depending on the composition of the branches, glycans are classified as:

Hybrid and complex glycans can be bisected (having an additional GlcNAc attached to the middle core mannose), sialylated (with terminal sialic acids), and fucosylated at the innermost GlcNAc.

Since the core structure of N-linked glycans is preserved, an abbreviated nomenclature system is possible, which only needs to indicate the terminal residues attached to the core. 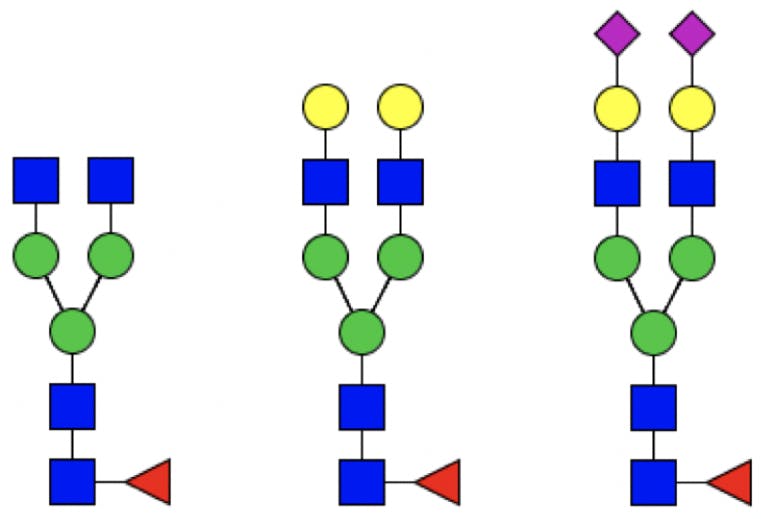 Where Do Glycans Come From?

Proteins are synthesised in the cell by ribosomes, in a process called “translation”: DNA from the cell nucleus is transcribed into messenger RNA (mRNA) and released to the cytoplasm. Ribosomes in the cytoplasm “read” mRNA and “translate” it to a sequence of amino acids, the primary structure of the protein.

Proteins destined to be secreted outside the cell, such as antibodies, are synthesised by ribosomes associated to the endoplasmic reticulum (ER), a large organelle surrounding the cell nucleus. As the peptide grows, it is transported (translocated) to the interior of the ER, where it undergoes a series of post-translational modifications (PTMs). 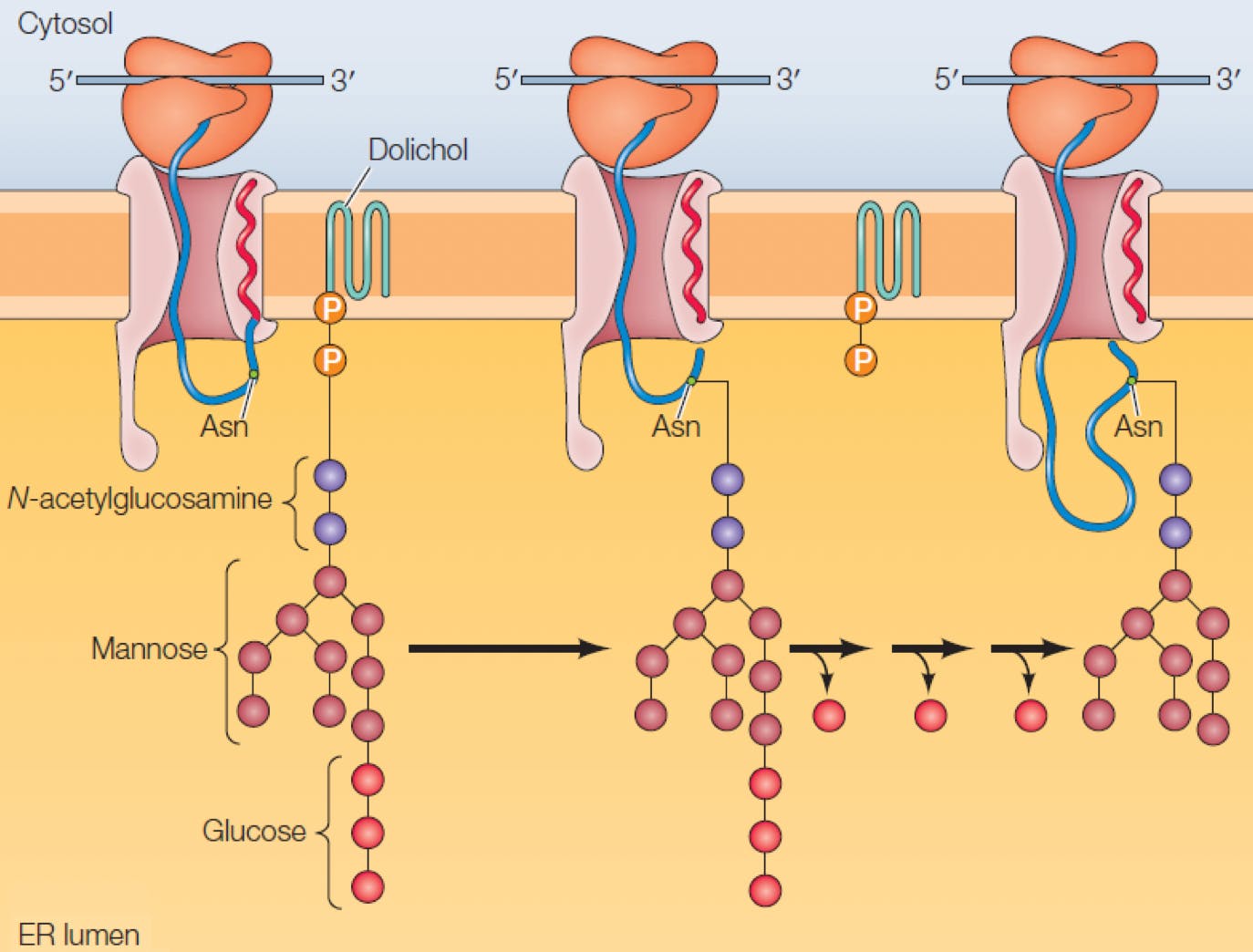 Figure 5: A peptide being translated from mRNA by a ribosome is translocated into the ER, where a new glycan is attached to an asparagine residue. Adapted from Cooper, 2019

Glycosylation is one of the first and most important PTMs to occur. A glycan consisting of two GlcNac, nine Man, and three glucose, is anchored to the ER membrane, close to the translocation pore. If a “Asn-X-Ser/Thr” sequence is detected in the peptide, an enzyme binds the glycan to the asparagine, resulting in an N-glycosidic bond: 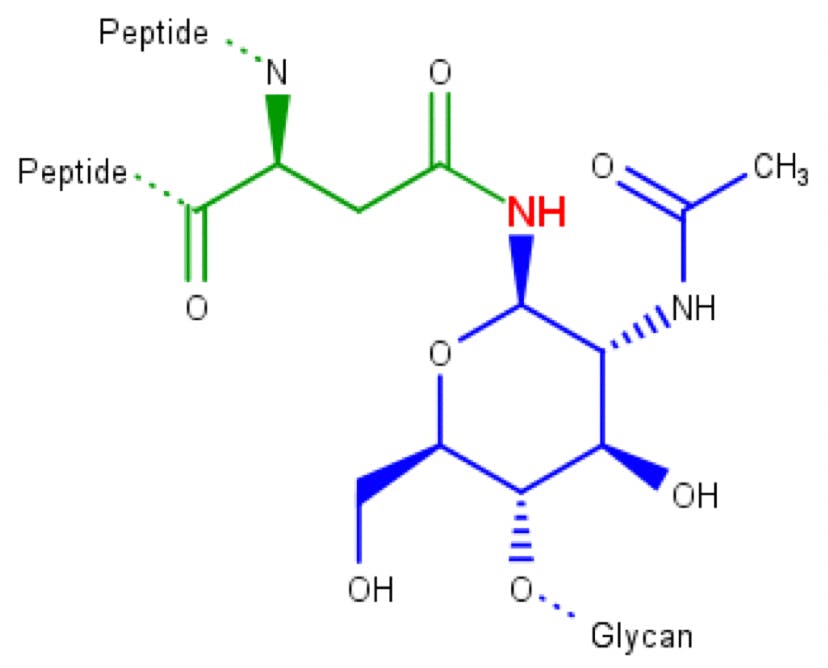 Folding the amino acid sequence into secondary and tertiary structures is the next step in the protein synthesis. This is done inside the ER with the help of so-called molecular chaperones, which gradually cleave the three glucose sugars at the end of the glycan as the protein is folded. These glucose residues seem to work like kanban cards to control folding.

If folded correctly, the glycoprotein will be transported to the Golgi apparatus for further PTMs, which may include cleaving and adding additional monosaccharides to the glycan. Therefore, all N-glycans begin life as high mannose structures, until they are further modified in the Golgi.

This has traditionally been a delicate and labour-intensive procedure, requiring two or even three days of careful manual work. However, a number of innovations have been introduced over the last decade that have resulted in a faster and more robust workflow, which can be fully automated and carried out in a fraction of the time. ProZyme Inc., founded in 1990 in Hayward, California, is one of the pioneering companies in glycan analysis behind many of these innovations. The following chart illustrates the evolution of N-glycan analysis products, emphasising the remarkable reduction in sample preparation time:

InstantPC™ is a fluorescent and ionisable tag, with a structure and chemistry quite different from 2-aminobenzamide (2-AB) and similar labels used in traditional glycan analysis:

InstantPC™ incorporates an N-hydroxy succinimide (NHS) carbamate group (known as an activated carbamate). Unlike traditional labelling, which requires two to four hours of reaction time at 65°C, activated carbamates take just minutes to quantitatively label released glycans, and the reaction can proceed at room temperature. On the Gly-X commercial kit, labelling is done in one minute at 50°C.

Traditional fluorescent labels like 2-AB, aniline, 2-aminobenzoic acid (2-AA), etc., bind to glycans through reductive amination, a two-step reaction. In the first step, the free aldehyde of the sugar reacts with the amine group of the label to form an imine (Schiff base):

In the second step, a reducing agent (most commonly sodium cyanoborohydride) reduces the imine to a secondary amine:

Unfortunately, this reaction has two practical drawbacks: enzymatically deglycosylated glycans are not released with a free aldehyde group, but an amine. They therefore need to undergo a “finishing” hydrolysis step (a minimum of 10 minutes at 50°C) to make them amenable to 2-AB labelling:

Furthermore, water must be removed from the finished glycan, because reductive amination requires anhydrous conditions (acidified DMSO, THF). This is routinely done overnight by centrifugal vacuum evaporation at low temperature, becoming one of the most time-consuming operations of the whole workflow.

Contrary to reductive amination labels, activated carbamates react with the amine group of the released glycan, making the “finishing” step unnecessary. What is more, the reaction proceeds in aqueous conditions, eliminating the need for lengthy and unreliable drying stages. This greatly simplifies the protocol, reduces glycan degradation, and improves the reproducibility of the overall method:

Figure 12: Reaction of a release N-glycan with InstantPC.

One of the main CQA requirements for glycoproteins is relative glycan quantitation, i.e. determining the percentage of each glycan species. Given the stoichiometry of the Schiff base and activated carbamate labelling reactions, each glycan can get only one fluorophore and direct relative quantitation by HPLC-FLD is possible. Because of their different degrees of hydrophobicity, different labels shift the retention times of labelled glycans by different amounts: 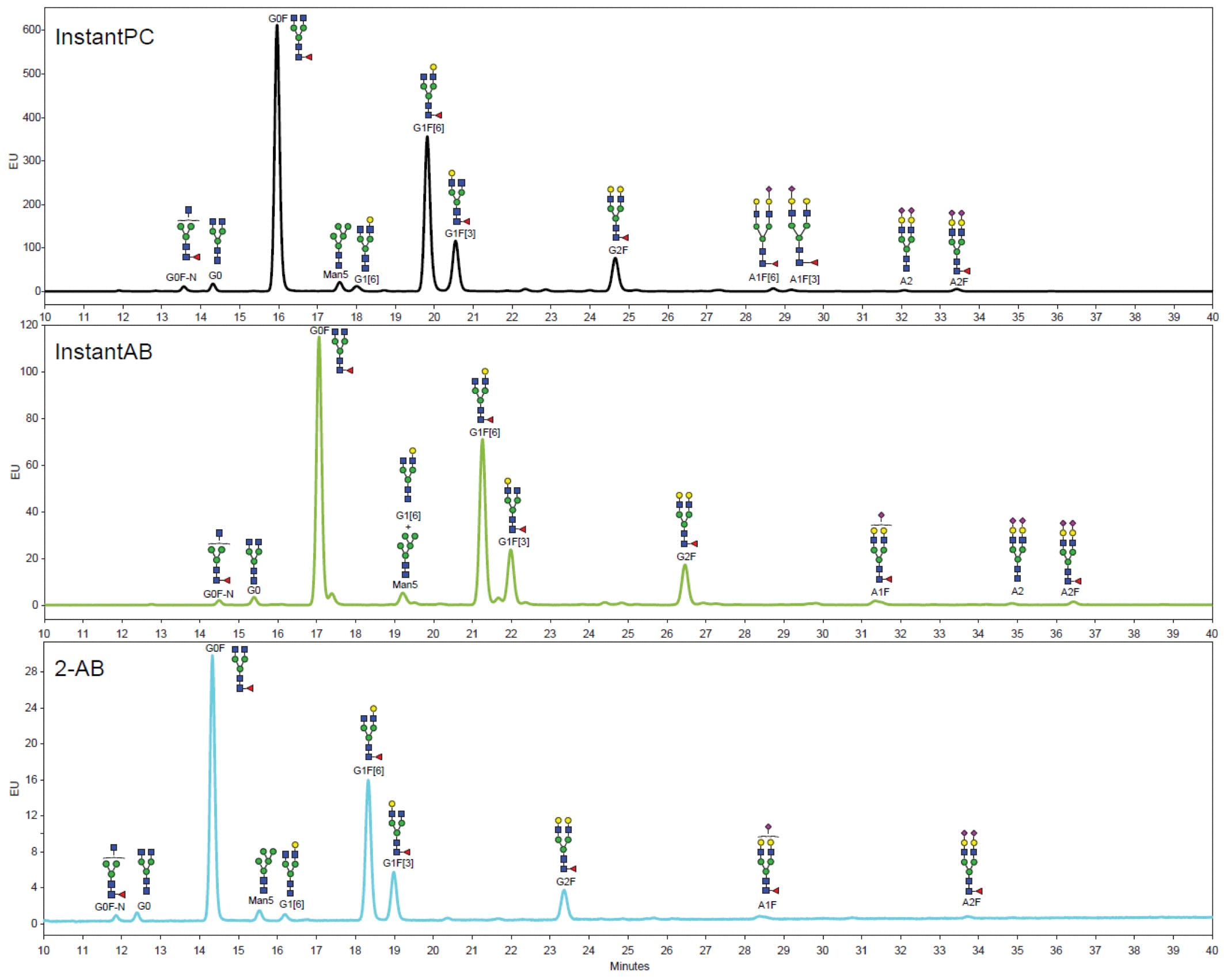 Relative quantitation by LC-MS can be more complex, because ionisation efficiency depends on the label and the structure of the glycan. InstantPC-labelled glycans have been shown to give similar relative quantitation results for LC-MS and LC-FLD analysis: 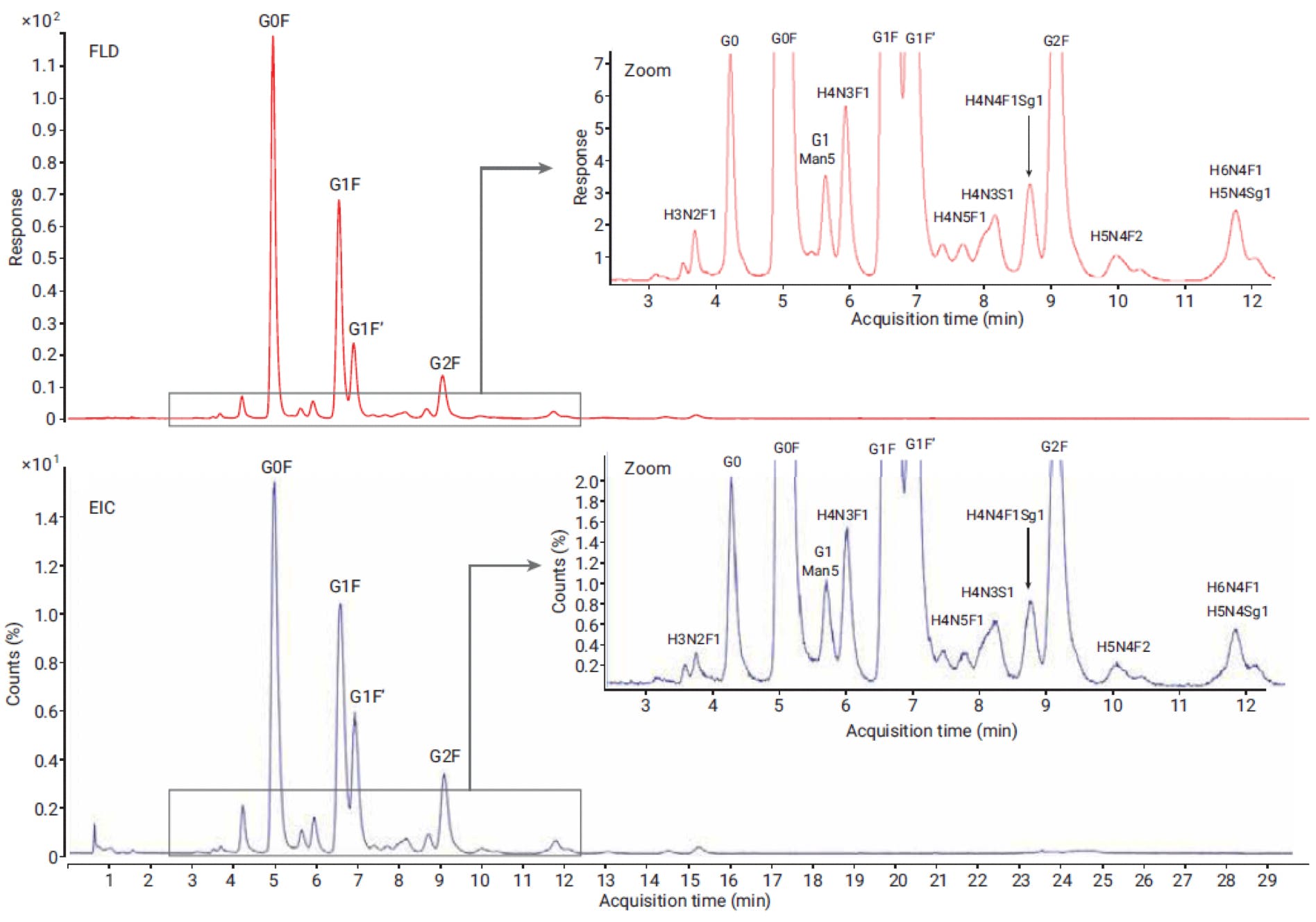 Most commonly, however, relative quantitation is performed with FLD detection and MS is used for identification and structural elucidation: 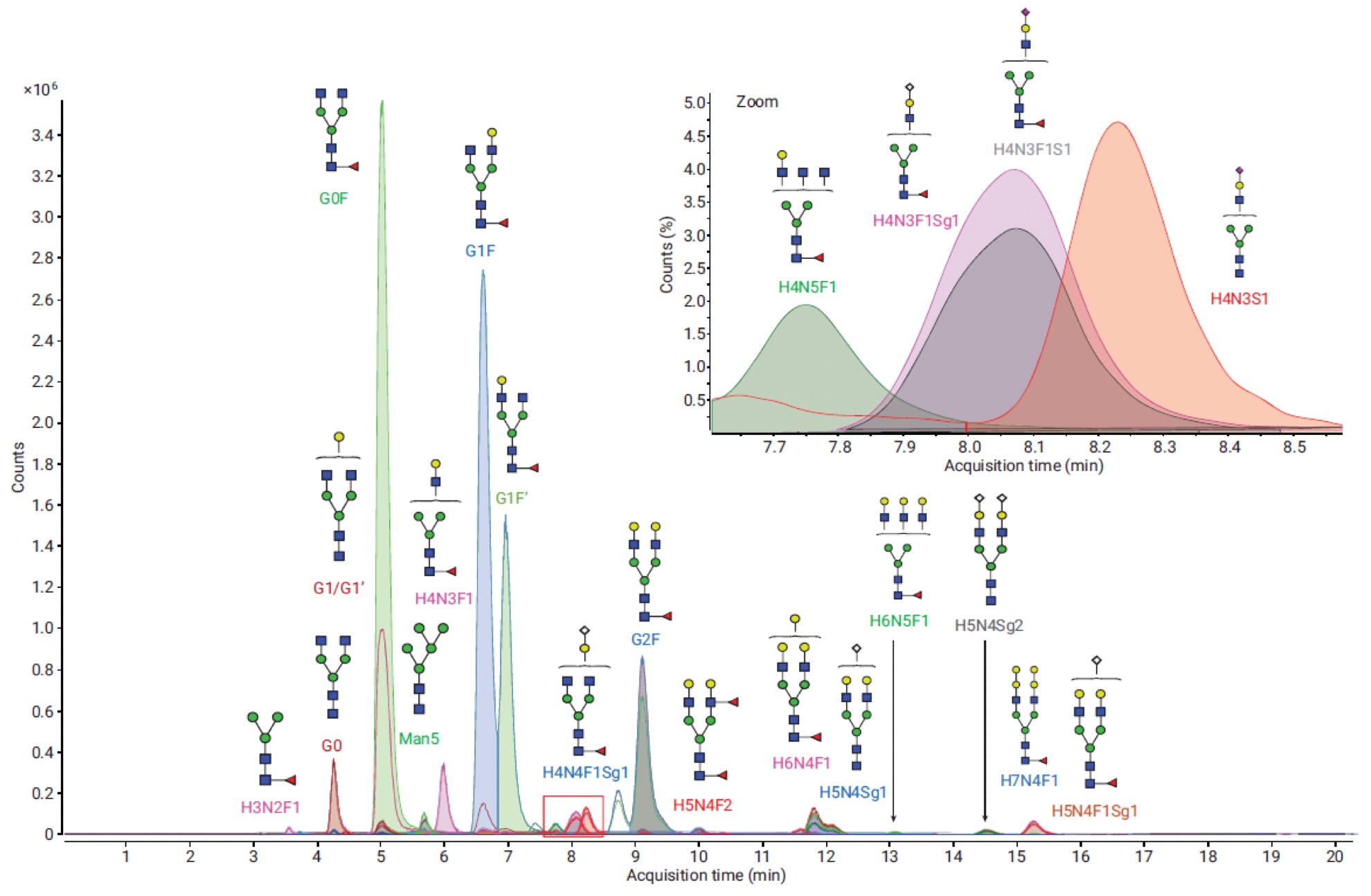 Glycans are complex polysaccharide structures attached to glycoproteins during biosynthesis, through O-glycosidic and N-glycosidic bonds. These structures are fundamental to the biological activity, toxicity and clearance of glycoproteins, and are therefore critical quality attributes of many biotherapeutics. One of the most accurate techniques to quantify and identify the glycan moiety of glycoproteins is called released glycan analysis, in which glycans are cleaved from the protein and analysed separately. In order to make them amenable to fluorescence and MS detection, released glycans are labelled with fluorescent and MS-active “tags”. The Prozyme Gly-X™ kit illustrated in this article is the state of the art in release, labelling, purification and analysis of N-linked glycans.

ProZyme Inc. was acquired by Agilent Technologies in 2018. The Prozyme (now AdvanceBio) Gly-X™ with Rapid Release and InstantPC™ Labelling kit highlighted here is the flagship product, but the portfolio also includes a complete range of reagents, enzymes, standards, and sample purification kits to cater for any deglycosylation and labelling workflow, including other reductive amination and instant labels.

The complete AdvanceBio Glycan range is now available through Crawford Scientific, and we are delighted to support our customers in this demanding and important application field. In addition to our expertise in column chemistry and method development for biotherapeutics, we also bring you the combined expertise of the ARCH Sciences Group in Lab Automation and LC-MS Analysis and Data Interpretation.