As separation scientists, an important part of our job is to make measurements. This is a simple enough statement. However, we should always bear in mind that every single measurement we make has some degree of ambiguity. Whether it’s because of instrument drift or poor calibration, because of the presence of interferences and artifacts, or because it is sometimes difficult to define exactly what we need to measure, we can never be sure that the value we obtain is the “true” value.

We are therefore forced to accept the existence of error. This error does not mean the measurement is wrong, it just means it has some degree of uncertainty, and it is also a very important part of our job to quantify and report this uncertainty. This article will try to give you some simple guidelines as to how to do this.

Whilst acknowledging and reporting uncertainty is important, it is always desirable to reduce measurement error as much as possible within our equipment, time, and budgetary constraints. Well established good practices can help reduce uncertainty: 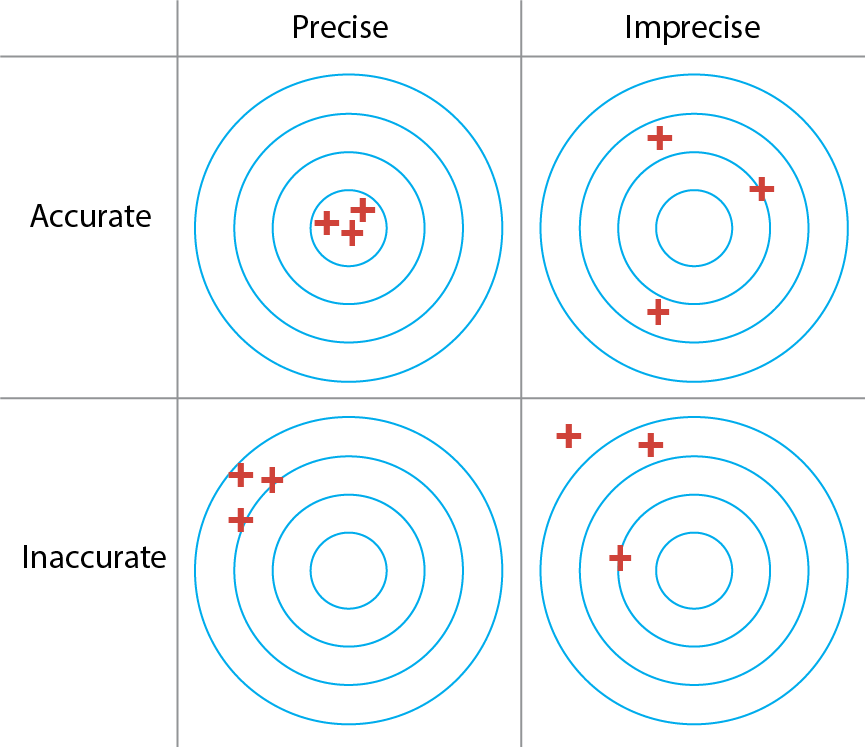 Accuracy and precision are terms commonly used to describe measurement errors. Accuracy is defined by the International Organisation for Standardisation (ISO) as “the closeness of agreement between a test result and the accepted reference value”. This “reference” value, often represented by the Greek letter μ (mu), is akin to the “true” value. Given a series of replicate measurements, the average or arithmetic mean is calculated as:

Statisticians call this a Sample and the limited size of this sample is, alas, the source of all my worries, errors and uncertainties. My measurement would be perfectly accurate if the mean (

) and the reference (μ) were exactly the same value; but since the sample is only a subset of the population, the probability of this is vanishingly low. Inaccuracy, or lack of accuracy, is the difference between the two:

If only we could measure everything an infinite number of times! All our methods would be perfectly accurate, and we wouldn’t need to bother with validation and complicated statistics. We would also secure a job for life and solve unemployment!

Precision, the other big measure of uncertainty, indicates the agreement between repeat measurements. It is often reported as the standard deviation of the replicates:

Spreadsheets and calculators have two alternative functions for standard deviation, and it is important to know which one to use. You get the calculation above when you press the following key in your calculator:

This formula gives the estimated standard deviation of the population based on the empirical measurements that make up our sample. The alternative calculation which is commonly found is:

Note the different symbol (the Greek letter sigma) and that the denominator is n instead of n-1. This is the calculation you get when you press this key:

This second formula calculates the standard deviation of the sample itself; it does not attempt to estimate the standard deviation of the population. Since our objective is in general to characterise the population based on the knowledge gained from the sample, we must in most cases use the “σn-1” function. The “σn” function should be limited to those cases where the sample is the whole of the population (i.e. when there is nothing else for us to measure and there’s no need to make estimates), or when we have such a very large number of replicate measurements that both calculations converge.

Calculators and spreadsheets can produce results with a large number of significant figures, but all those decimal places do not always make sense. Below are some recommended practices for deciding how many significant figures we should carry, and for rounding up (or down) our results:

Round the final answer to the correct significant figures using the following rules:

As empirical scientists, our business is to collect good quality data and use it to interpret the world around us. We need to be mindful, however, of the limitations imposed on us by a range of external factors, such as the equipment we use, the protocols we follow, the nature of the systems we attempt to measure and, ultimately, the laws of probability (and managers, budgets, deadlines…)

The compounded effect of these factors is the introduction of errors in our measurements and uncertainty in the interpretation we make of them. We have tried to explore in simple terms why measurement uncertainty arises, and a few simple rules and best practices to try to mitigate or, at least, manage its effects.

There is ample literature on measurement error, uncertainty, and statistical analysis; and the subjects themselves are constantly evolving. We recommend some references for further reading: