Just as medical practitioners are able to discern critical symptoms (signals) from baseline noise using a variety of medical physics devices (i.e. electrocardiogram, electroencephalogram, ultrasound) chromatographers need to develop a similar set of skills to identify worrying symptoms from HPLC instrument output.  Bad data and instrument failure come with an associated business imperative, but we must also learn to spot these problems for the sake of lab efficiency.

One of the most useful diagnostics in HPLC is the nature of baseline produced by the detector whilst the eluent is flowing.  While many baseline characteristics are common — such as drift, and atypical regulation cycling (pulsations) — baseline noise is arguably encountered more often and can arise from a variety of different sources. Moreover, it’s vital to understand what constitutes ‘normal’ baseline, as opposed to unusual levels of baseline, depending upon the instrument configuration.

How do we hush noisy baselines?

The signal to noise of the HPLC output is usually measured as the ratio of the detector signal to the inherent background signal variation. This is a useful measure of the ‘normal’ noise within the system.  The inherent or background noise is typically measured over a pre-defined portion of the baseline and most data systems will be capable of making this measurement and reporting the result. 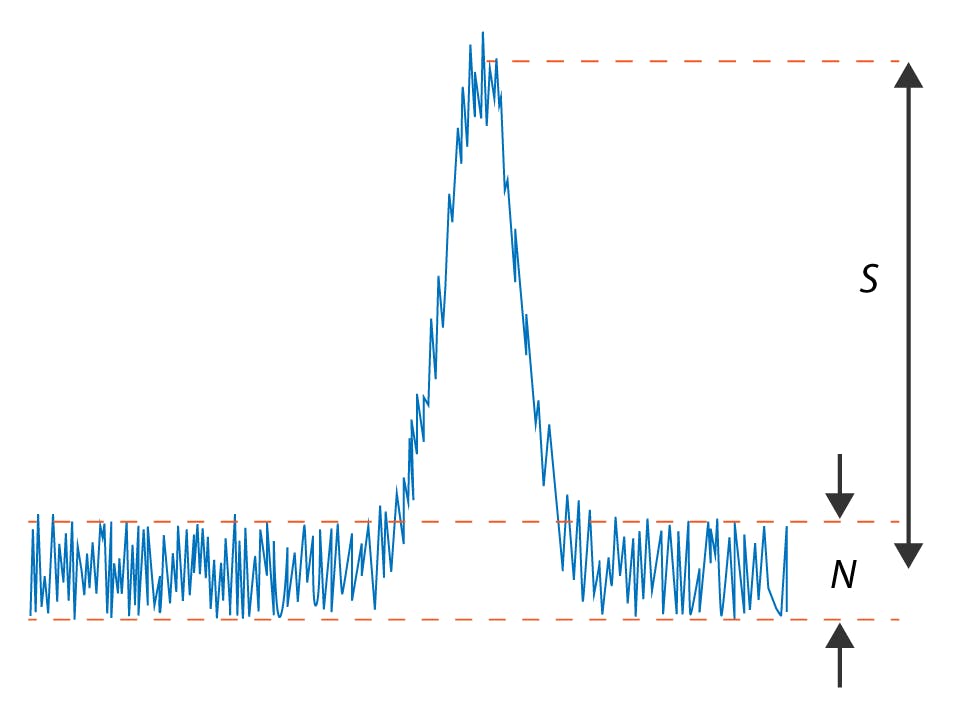 When inherent or background noise within the system is unusually high, this can affect system performance and will usually result in an increase in the limit of quantitation and issues with reproducible integration.  This is why, as chromatographers, we get so worked up about noise levels which are higher than expected.

The smallest detectable signal is usually estimated as equivalent to three times the height of the average baseline noise – this would give the detector a signal to noise ratio of 3:1 for the ‘Limit of Detection’. If the amount of analyte injected is less than this, then the signal ceases to be distinguishable from noise. For quantitative analysis a signal to noise (S/N) ratio of 10:1 is recommended for the ‘Limit of Quantitation’.

The magnitude of the analyte signal cannot be used in isolation when calculating detector sensitivity — i.e. the sensitivity of detection is usually defined in terms of ‘Signal to Noise Ratio’, a measurement of the ratio of the analyte signal to the variation in baseline. Signal to noise (S/N) measurements are usually carried out by the data system. 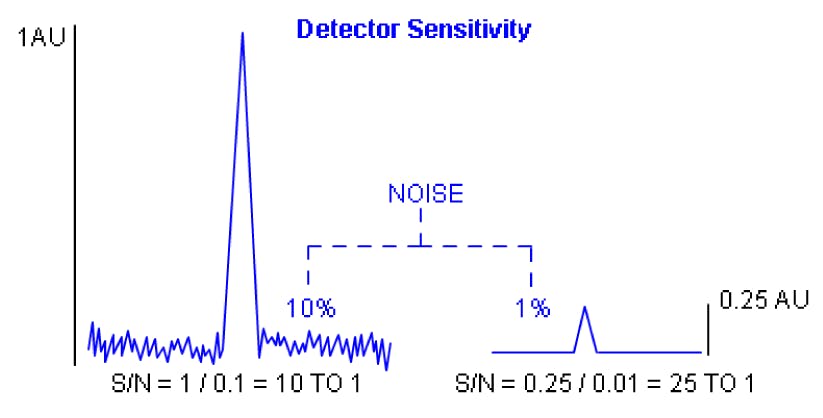 One needs to begin by establishing the signal to noise ratio when the method (or instrument) is performing well, preferably for each method and set of instrument conditions. Perhaps this extends to a system suitability performance criterion (usually a range or lower acceptable limit) for the determination.

Of course, the seasoned chromatographer will know by glancing at the baseline, whether the inherent noise is ‘usual’. But this only comes with experience.  One should also take care to assess the noise at a reasonable screen magnification or signal attenuation as any baseline can be made to appear noisy with the correct level of magnification! 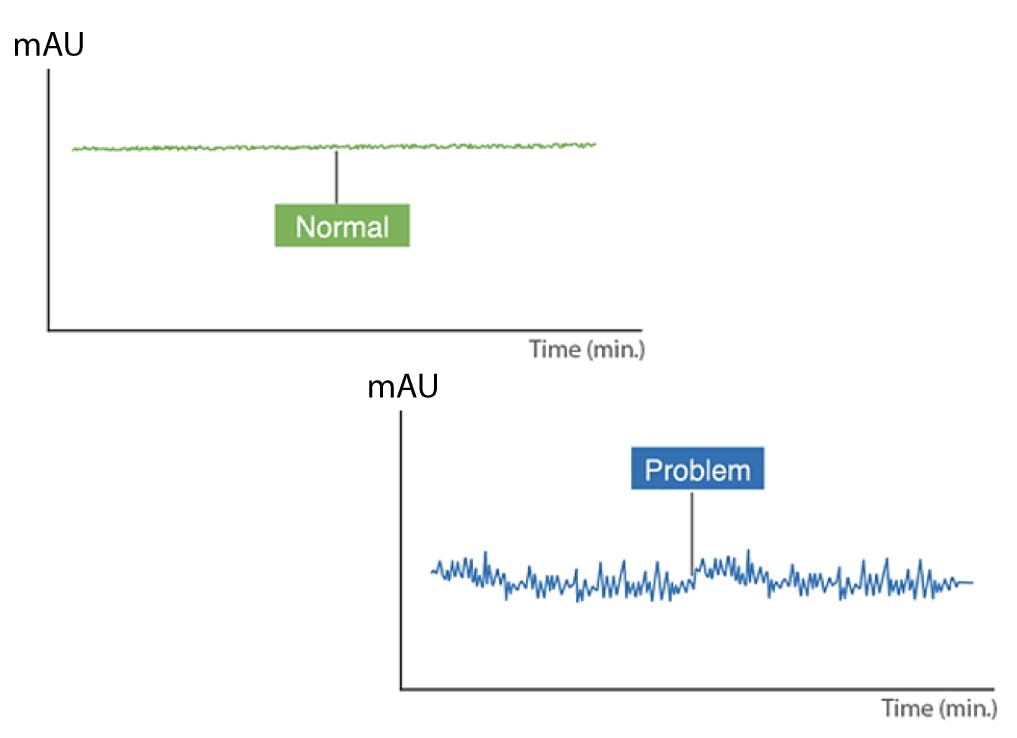 Figure 3: Developing a ‘chromatographer’s-eye’ for what is typical (normal) noise and what is unusual.  Care should be taken to select a sensible on-screen attenuation for the signal.

However, once again the data system may be able to help us out by reporting what is known as the peak-to-peak noise, which may be expressed as absorbance units.  This is measurement of the variation in the normal baseline portion — rather than a ratio to the height of a signal — and can be very useful at establishing acceptable limits for the background noise.  Most HPLC detectors will run a noise test evaluation as part of their initialisation routine. Otherwise, they can perform a longer test using, say, ASTM criteria with HPLC grade water flowing through the flow cell.  Specifications for acceptable noise levels will be given in your manufacturers literature.

Although typically associated with detector phenomenon, there are many contributors to the noise within HPLC results. We will now examine just some of the main culprits.  Noise can be both random and periodic depending upon the nature of the underlying cause of the problem. This difference, in itself, can give us some clues to the nature of the issue.

Every detector has background electronic and stray light noise, which can be kept to a minimum through shielding of the optical bench with insulating materials.  The in-built tests within the detector firmware should keep this to a minimum and the instrument will flag if any of these tests fail on start-up.  This is a good reason to cycle the power on the detector every now and then, especially if the practice in your lab is to leave the detector on when not in use.

These problems may be overcome in the following ways:

Most Diode Array UV detectors have a ‘slit width’ setting which describes the width of the slit used to focuss light onto the photodiode after passing through the flow cell.  As the slit width is increased, the light becomes more diffuse and each wavelength falls over a number of photodiodes (corresponding to the slit width setting).  This reduces the noise of the baseline whilst increasing the signal intensity, allowing for greater analytical sensitivity when quantifying analytes.  However, the spectral resolution necessary for qualitative analysis (peak track via library matching for example) is lost, which needs a much narrower slit width setting so the light is less diffuse and each wavelength falls on a smaller number of diodes.  When slit width is reduced, the noise level increases. Always set slit width according to analytical requirements. 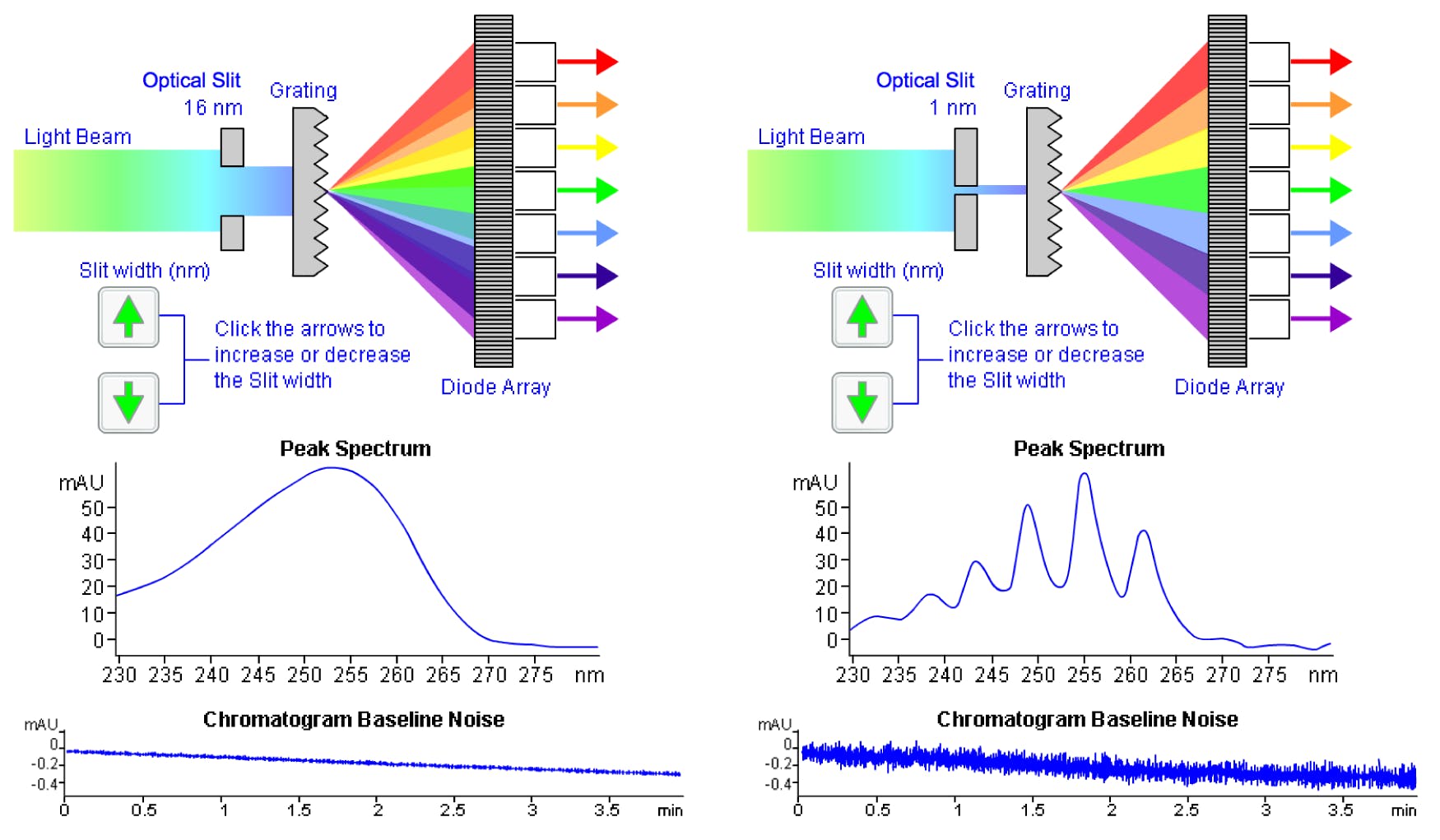 Figure 6: The relationship between slit width and baseline noise in Diode Array detectors.

Where n is the number of data points.  Simply put, the more measurements that are taken, the better we model the random variations associated with instrument response change, meaning the noise is resolved more effectively.  It’s important to carefully balance the signal to noise ratio with the actual peak-to-peak noise generated, which is usually achieved using the instrument Response or Frequency.  This needs to be balanced further with the number of data points acquired across each peak, which should be in the region of 20-25, or higher for UV data. 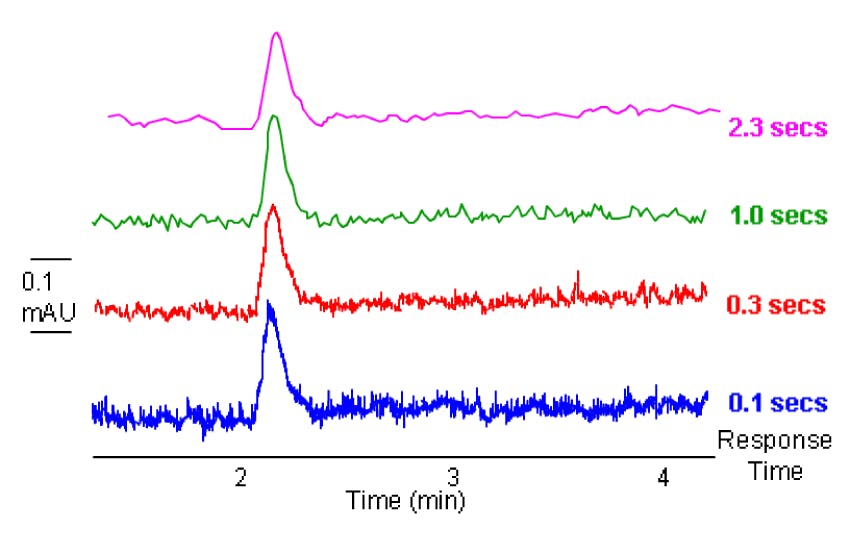 As alluded to earlier, the deuterium lamp within the UV has a finite lifetime and, as such, can lead to increased baseline noise and spikes as the lamp arcs against the metal casing onto the mounted filament.  This produces a baseline appearance similar to that shown in Figure 8.  Lamp replacement must be considered to ascertain if the spiking is due to the age of the lamp.  Note that other causes of baseline spikes (such as a poorly shielded electrical supply or power board within the detector) are also possible. 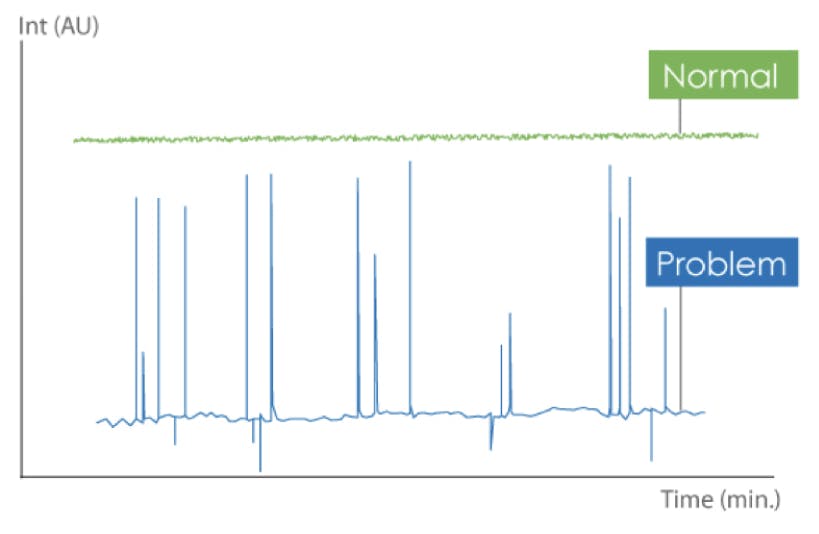 Spikes can be distinguished from ‘real’ peaks as they will have no Gaussian shape when zoomed in.

Other sources of noise

HPLC UV detectors can be very susceptible to improper mixing of mobile phases — which are formed online via either binary or quaternary pumping systems.  Absorbance changes due to poor mixing are usually associated with a sinusoidal pulse (covered in a future blog) however, at lower pumping volumes, or when using additives such as TFA, the disturbances can resemble noise rather than a discernible sinusoidal pulse. 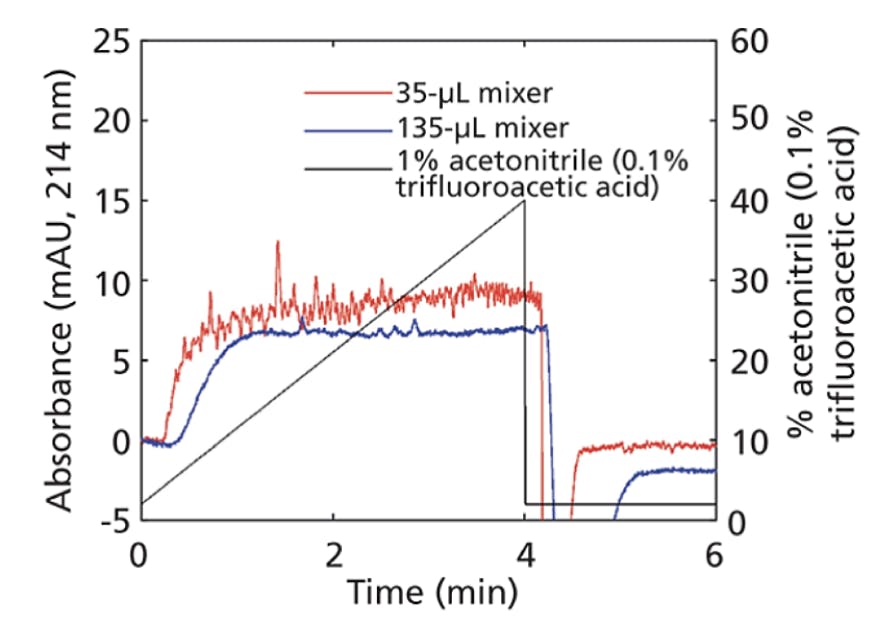 Figure 9 shows the differences made to the baseline appearance of a 0.1% TFA gradient with various mixer volumes.

Even though modern HPLC instruments are designed with high-efficiency mixers, the addition of a post-market static mixer, or simple in-line filter, can help drastically in reducing the baseline noise under the circumstances described above.  Note that the additional extra column volume contributed by the fitting of in-line mixers may have a detrimental effect on peak width, especially in UHPLC systems. Balance any increase in peak width with a reduction in baseline noise when assessing the signal to noise characteristics of the method. 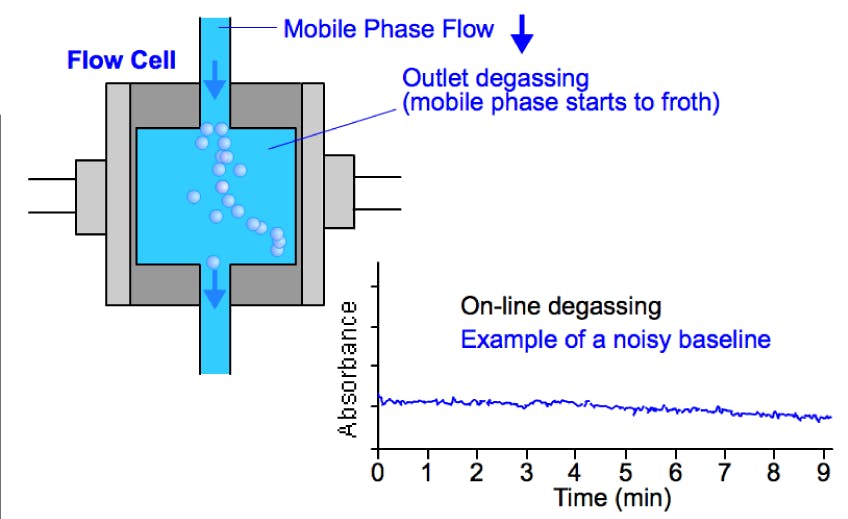 Ensure that the eluent is properly degassed using on-line degassing modules and, in some cases, by degassing using vacuum methods prior to mounting onto the HPLC system.

If the HPLC column contains residual packing solvents, or has been used with immiscible solvents (for example in normal phase mode), then improper flushing of the column can lead to increased baseline noise associated with the dewetting phenomenon.

Equilibrate the column for several hours at the method flow rate in order to completely flush the column of any immiscible solvents.