Following on from my our previous guide on peptide mapping, inclusion of a charged surface endcapped C18 phase can be of great advantage for tricky separations. So, what are the benefits that can be gained and when should we use this rather than a standard encapped C18 phase?

As with any chromatography, we need to start by looking at what interactions are possible between the analytes, stationary phase and our mobile phase. We can then take advantage of the tools available to fully optimise our application.

First, let’s consider the conventional approach of using a C18 column, assuming we’re working with peptides that are sufficiently hydrophobic to show reasonably good retention and selectivity with this phase. Trifluoroacetic acid (TFA) and formic acid (FA) are among the most common mobile phase additives in reversed phase peptide analysis. Both will generally cause the peptides to be positively charged. At the same time, they are strong enough to neutralise the silanol groups on the stationary phase surface. TFA (pKa ~0.23) can fully neutralise the surface, whereas FA (pKa ~3.75) will achieve partial neutralisation at the usual concentrations of 0.1% to 1%. By neutralising the surface, TFA and FA reduce secondary electrostatic attraction of the peptides, minimising peak tailing. Additionally, TFA anions can form stable ion pairs with the peptides. This significantly increases hydrophobicity and retention, but also results in a reduction in ESI-MS sensitivity. As a compromise, FA is generally preferred over TFA for LC-MS analysis.1

LC/MS is often the chosen option for resolving deamidation products (the conversion of asparagine or glutamine residues to their corresponding carboxylic acids) and confirming the site of deamidation. Resolving deamidated peptides from their unmodified counterparts can be challenging: the reaction introduces a small change in hydrophobicity, but coelution can often still be observed. Fortunately, deamidation also results in a mass increment of 0.9840 Da, and this can sometimes be used to identify both species if mass spectra of sufficient quality can be obtained. Figure 2 illustrates the spectral difference between an intact peptide and its deamidated variant. 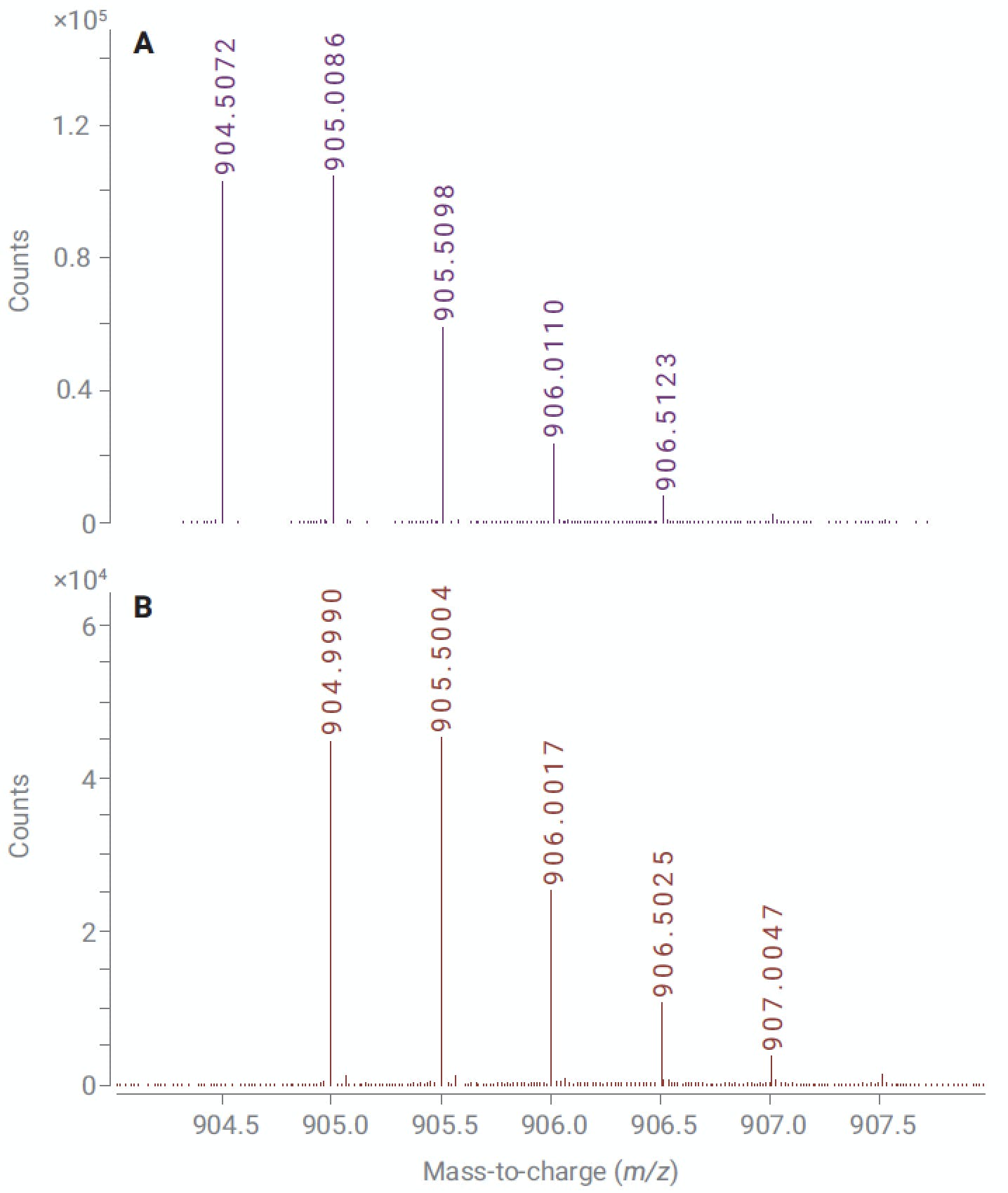 Figure 2.  Mass spectrum of VVSVLTVLHQDWLNGK (A) and a deamidated variant of that peptide (B), showing overlap between mass spectra.

In cases such as these, to switch to an alternative chemistry such as a Phenyl-Hexyl or Cyano phase will show a big difference in selectivity, which may in turn create other issues with resolution. More desirable is a phase that can allow for minimal selectivity change, just enough to resolve the troublesome peaks. Ideally, we want the benefits we get from using TFA to minimise secondary interaction with lone silanols and exploit the differences between the native and deamidised peptide – whilst at the same time avoiding the disadvantages.

Charged surface C18 phases, such as the AdvanceBio Peptide Plus from Agilent, incorporate a positively charge surface with C18 functionality and encapping2. This has multiple positive effects.

Firstly, with the combination of the C18 ligand, the encapping and the proprietary charged surface there is maximum coverage of silanol sites on the stationary phase. This allows for decreased secondary interaction between the positive peptide and negative silanols, reducing peak tailing. In addition, the native peptide will experience a slight repulsion from the positively charged surface, decreasing retention and allowing for further resolution between the peaks due to the difference in charge.

The use of modifiers is almost a necessity with standard C18 phases, where significant improvements in chromatography are seen with the use of TFA. However, the main benefit, as discussed above, are the uncharged silanol groups, no longer an issue as we have the addition of a charged surface. TFA, as a mobile phase additive, will not only interact with the positively charged peptides, but also form strong ion pairs with the charged surface, essentially removing the benefit. With formic acid however, we can have the full benefit from the charged surface, allowing similar or improved resolution to TFA, and enhanced MS sensitivity.

These effects are demonstrated in figure 3 where the separation of peptides and their deamidated variants on the charged surface AdvanceBio Peptide Plus column is compared against the endcapped C18 Advance Bio Peptide Mapping. We can see poor resolution on the standard phase for a number of the deamidated peptides, and for peptides C and E coelution is observed.

The charged surface AdvanceBio Peptide Plus yields improved resolution of all products and full resolution of the previously coeluting peaks. 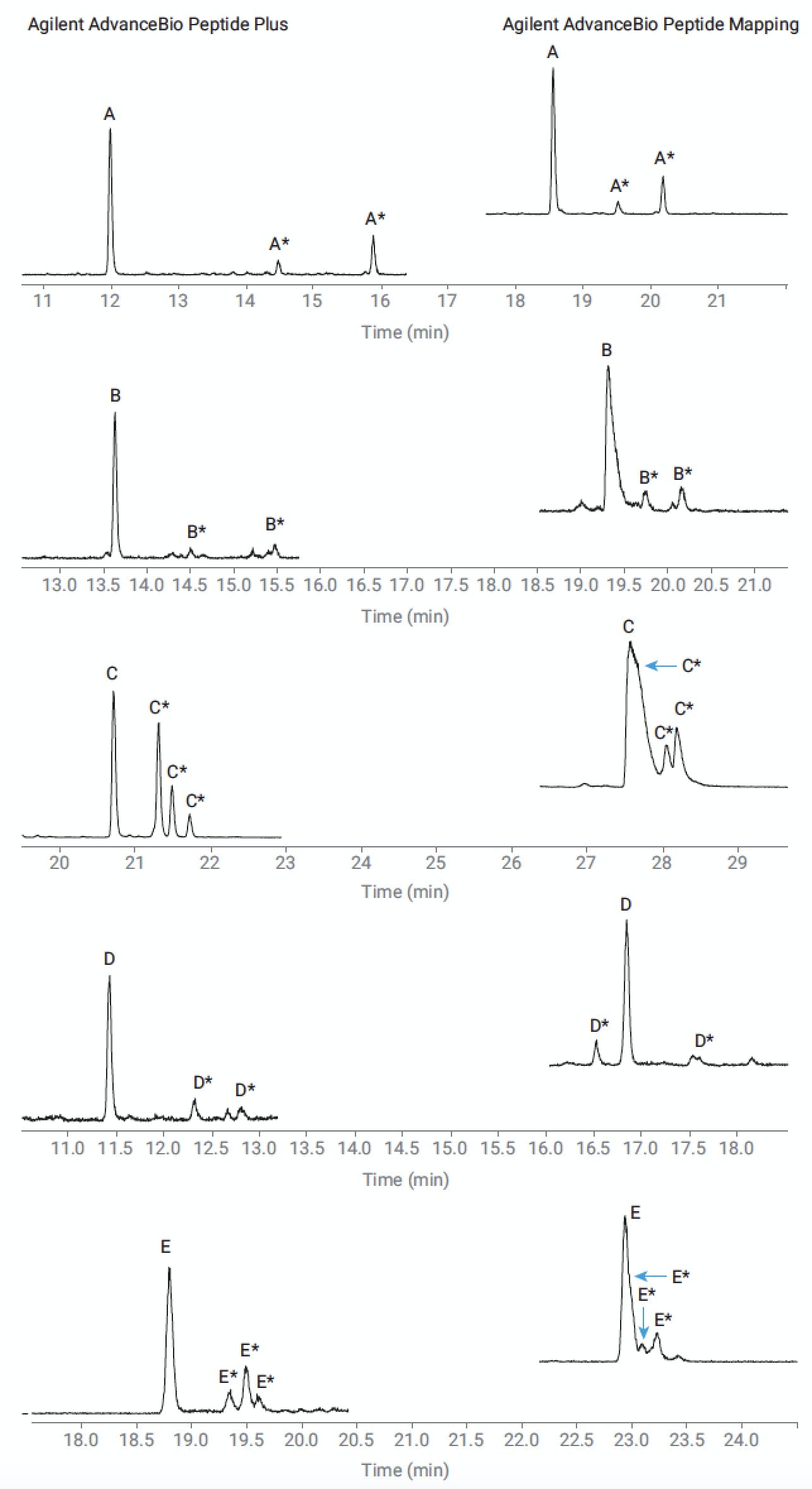 There is such great variety in peptide chemistry that knowledge of the peptide structure is key for identifying the best stationary phase option. A tool kit with a variety of screening columns will be essential for fast development of the most efficient and robust analytical method. Including a charged surface C18 offers a range of important benefits, specifically for cases where resolution of deamidation products is an issue, and where TFA must be avoided to maximise MS sensitivity. Agilent’s AdvanceBio Peptide Plus column is also one of the few charged surface phases on the market based on superficially porous particles, benefitting from the increased efficiency of this technology to allow high resolving capabilities and fast analysis.

If you need any support for a current or upcoming project, or if you’d like to know about current offers on method development kits, please get in touch with one of your area Account Managers or you can reach our technical team directly at [email protected] You can also contact us for more information on the Poroshell CS-C18 columns, designed for general small molecule applications and benefiting from the charged surface technology used in the AdvanceBio Peptide Plus.