Ammonium acetate buffers can cause various problems in the lab. Two common problems include surprising rises in HPLC-MS backpressures when starting the instrument after overnight storage and difficulties with MS sensitivity.

Increased instrument backpressure when using ammonium acetate (and ammonium formate) is a common problem found on chromatography forums, especially when the instrument was standing overnight or on the first few runs of each day. High soluble aqueous buffers can cause a great deal of head scratching. They become problematic in practical use, blocking capillaries, pre-columns, and analytical column end frits.

These problems invariably result from misunderstanding buffer solubility in mixed organic aqueous media. This can be overcome using the data shown in Figure 1. 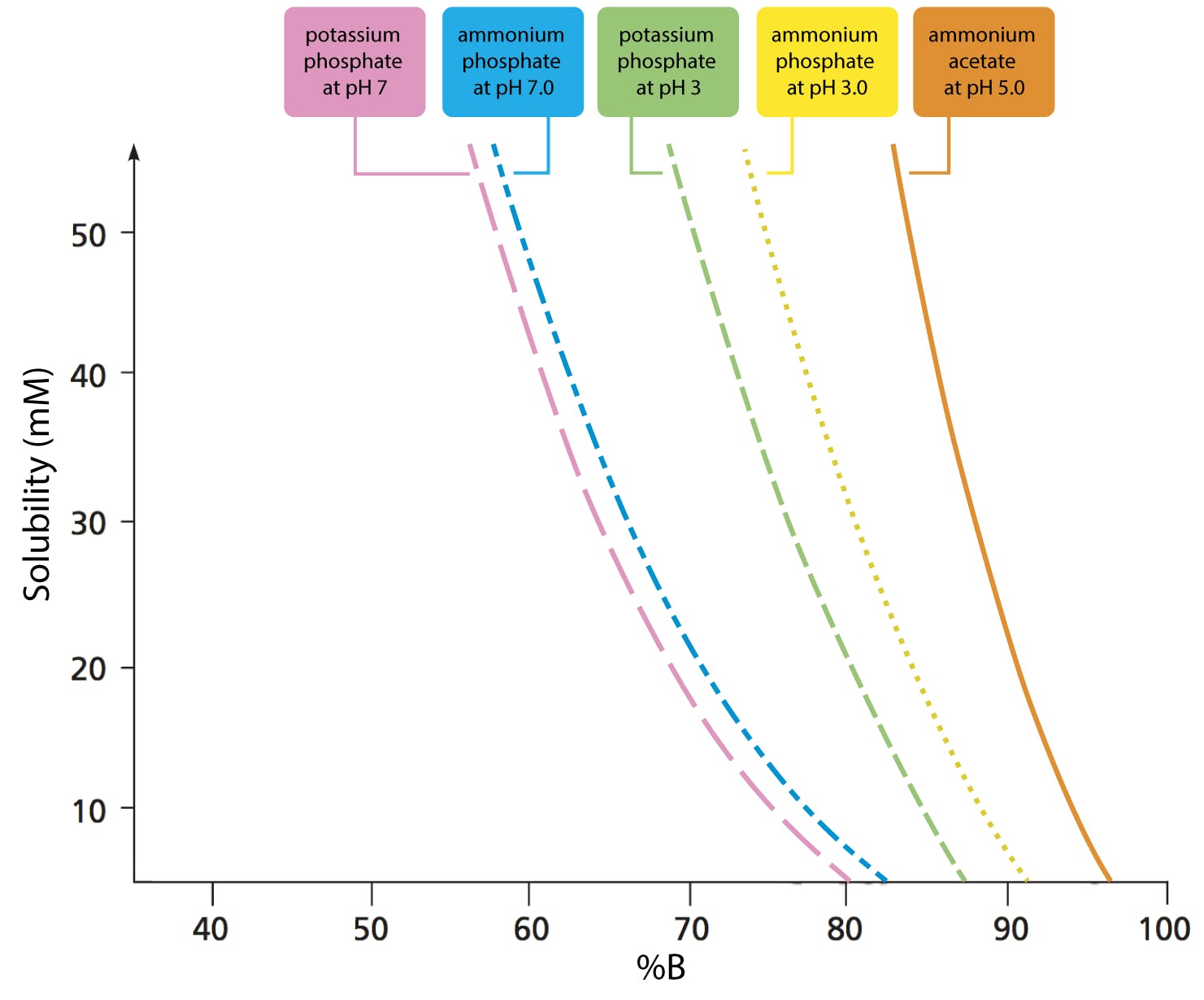 Figure 1: Solubility of five buffers in mixtures with acetonitrile. (Adapted with permission from Ref. 1) 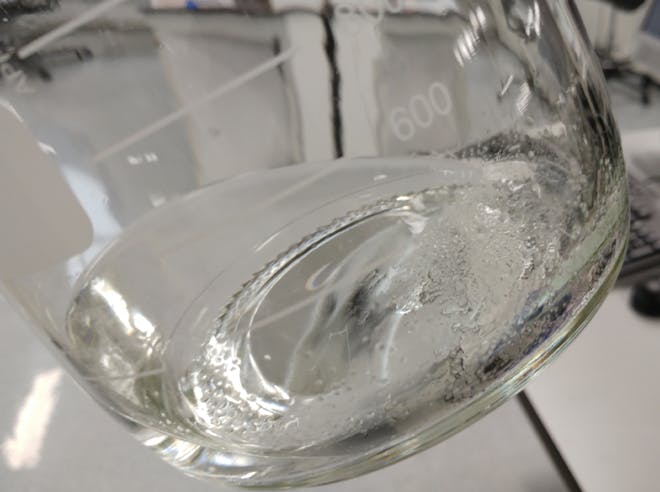 In a typical reversed phase HPLC gradient, this is perhaps not so much of a problem, unless of course your gradient goes to >90% acetonitrile.  However there are other considerations, such as the relative percentages of organic solvent the aqueous buffer may encounter when mixing using low or high pressure mixing systems, when injecting samples dissolved in high percentages of acetonitrile or, in the worst of all cases, when systems are flushed with 100% acetonitrile to remove column contaminants or for overnight storage.

There is the further consideration, when using 100% acetonitrile for column storage, that large pH shifts can occur in 100% organic solvent and one  needs to be mindful if these pH shifts might take the column storage pH into a range where the dissolution of the silica matrix may be possible, leading to the formation of ‘fines’ within the column which will ultimately result in  column blockages (at high pH) or the stripping of the bonded phase ligands (at low pH).

Ammonium Acetate as a Buffer

Many chose to use ammonium acetate as a buffer, especially when using MS detection, due to its inherent volatility and low propensity for API source contamination. However, be mindful of this limited solubility and adjust our HPLC practice accordingly. Understand if the use of ammonium acetate is appropriate for the experiment and if a buffer is actually necessary. The requirements for use and the appropriate choice and concentration of a buffer are commonly misunderstood. Ammonium acetate is the case in point to investigate the uses and misuses of this much-loved buffer system.

Buffers are required to resist small changes in pH (primarily of the eluent) and to ensure that the HPLC column remains in a state of constant charge (primarily the state of ionisation of residual silanol species on the surface of the silica support). Changes in pH may cause problems with retention time stability, peak shape, and (when using Electrospray MS) instrument sensitivity. Typically, the biggest ‘challenge’ to the system pH will come from mixing the sample diluent with the eluent in the connective components between the injector and the HPLC column (or pre-column) and at the head of the column. If the sample diluent has a different pH, then the analyte (or a portion of the analyte molecules) may change ionisation state and chromatograph differently or respond differently in the MS interface as a result. However, understanding the chemistry of our analytical method to make critical choices on the type and concentration of buffer is important. The analyte concentrations and amount of column surface requiring pH control are low enough to need only a very low concentration of buffer to maintain reproducible retention times, acceptable peak shape and detection sensitivity.

Figure 3 indicates the situations in which ammonium acetate can be of use in both chromatography and mass spectrometry. 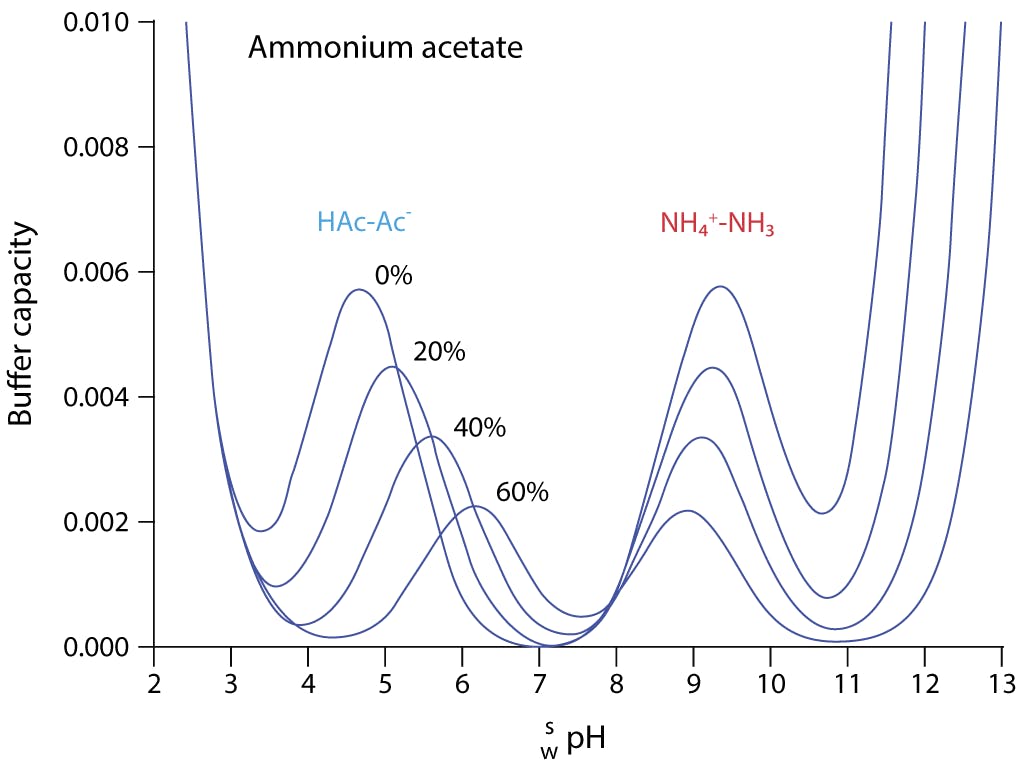 Essentially, there are two buffering regions when 10mM ammonium acetate is added to our eluent solution, and either dilute ammonia or formic acid are used to adjust the pH. Without the addition of the acid or base, the solution will have very little buffering capacity.

In 100% aqueous solution, the buffer pKa values are around 4.8 and 9.5. The buffer is best used around +/- 1 pH unit from the buffer pKa, where the buffering capacity will be reduced to around 66%. At 2 pH units away from the buffer pKa, buffer capacity is reduced to around 5%. For an ammonium acetate buffer in water, the eluent pH used for separation should be 3.8 to 5.8 when using formic acid as the pH modifier and 8.5 to 10.5 when ammonia is used to adjust the eluent pH. The caveat: once acetonitrile is added to the system this working range changes and the usable pH range becomes 5.2 to 7.2 or 7.9 to 9.9 at 60% acetonitrile. For gradient separations, the pKa of the buffer system will change constantly. The pKa of the system at the starting gradient composition is used to estimate the usefulness of the buffer for the separation.

Will these pH ranges be sufficient to avoid changes to the extent of analyte ionisation or column protonation changes? That’s the key question.

For MS detection, ionogenic analytes in the ionised form will result in good detection sensitivity, while managing reversed phase retention through judicious choice of stationary phase and organic solvent type and composition. If the analyte is fully ionised at the pH ranges suggested above (and in Figure 3) then good chromatographic and detection performance will result. Note from Figure 1 that the buffer capacity of the system reduces as acetonitrile is added, with the buffer capacity dropping to 30% of the aqueous value at 60% acetonitrile. The key principle with buffer use in LC-MS is to use as little as possible to maintain retention time reproducibility, acceptable peak shape, and detector sensitivity. The concentration of buffer will directly influence the amount of ion suppression encountered and, therefore, method sensitivity will be directly affected. To maintain good buffering capacity at lower buffer concentrations, we often aim to work within +/- 0.5 units of the buffer pKa.

Table 1 shows the recommended pH ranges in which ammonium acetate buffers will be useful.

Use the buffering ranges from Table 1 to select the eluent pH in which the analyte should be 100% ionised. Note that the buffer concentration used to derive these figures is 0.1mM—a popular choice for buffer concentration when using MS detection. For basic analytes, the acetic acid/acetate buffering system is common, and the eluent pH is usually well below the pKa of the basic analytes, ensuring that they are constantly protonated. The same may be true of acidic analytes with the ammonium/ammonia system, where acidic analytes should all be fully deprotonated. This will ensure that retention times are steady, peak shapes are healthy, and that the MS sensitivity is optimised from a method chemistry perspective.

There are large gaps in the effective buffering ranges for ammonium acetate based eluents. That is, at a 20% acetrontrile eluent composition (or starting gradient composition of 20% acetonitrile), there is likely to be lower buffering capacity (higher buffer concentrations will need to be used) with an eluent pH below 4.2, between pH 5.2 and 9.0 or above 10.0. There are other methods where eluent pH is adjusted outside these recommended ranges when using ammonium acetate buffers. Consider using a different buffer system—the formate/formic acid system is a popular choice at eluent pH values below 4.2.

Should A Buffer Always Be Used?

If the eluent pH is far from the pKa of the analyte, small changes in eluent pH will have a negligible effect on the degree of analyte ionisation. Under these circumstances, the use of a buffer may be unnecessary. For example, acetic (as well as formic, trifluoro, and difluoroacetic) acids have a substantial ‘self-buffering’ capacity a low pH, and provide the basic analyte pKa >2 pH units higher and acidic analyte pKa

This is all assuming that basic analytes are analysed using an acidic eluent system and acidic analytes with a more basic eluent system pH to ensure full ionisation and good electrospray MS sensitivity. If experiencing issues with instrument backpressure, retention time instability, or MS detection sensitivity, then it may well be worth considering if a buffer salt is required at all. The judicious use of formic or acetic acids or ammonia solution may well solve any issues.

Whatever the case, take time to understand the chemistry of the method with respect to your analyte pKa, the required eluent pH, and the choice of buffering system used to attain and maintain this pH within the system.

For those who do not have analyte pKa information, there are a number of free programs available which do a reasonable job of predicting analyte pKa based on structure. Widely used in our labs are:

If seeking a deeper understanding on buffers and their use within HPLC and LC-MS, refer to the articles in references 3-6.