Modern HPLC method development is dominated by a small number of pH adjusting reagents and/or buffers, that are prevalent even when the method uses UV detection. This is driven primarily by the requirements of mass spectrometry. These pH adjusting reagents and buffer combinations are shown in Table 1.  While they are all, in theory, MS compatible, they are sometimes chosen without justification.

I want to revise some of the basics of HPLC buffer use, as well as highlighting some other buffers that can be very useful when these stock buffers aren’t successful.  This saves time and money when coming up against roadblocks with separation development as, once all of the usual buffers have been tried, attention turns to changing the column chemistry, which may not be necessary.

A Revision of Buffers

Remember that the pH adjusting reagents will not provide any buffering capacity, meaning that if changes in pH are encountered by analytes (typically, while the sample diluent and eluent within the instrument tubing or at the head of the HPLC column are mixing) it may result in poor peak shape, poor retention time reproducibility, and potential loss of resolution.

Buffers exhibit their greatest buffering capacity at +/- 1pH unit around the buffer pKa. The closer the eluent pH is to the buffer pKa, the lower the concentration of buffer which needs to be used in order to provide effective resistance to change in pH.  For LCMS applications, aim for 10mM buffer concentration or less and for UV based applications (less than 25mM is preferable).

Bear in mind the UV contribution of the additive when working at low UV wavelengths (<220nm) and be smart with UV detector settings to avoid sloping baselines [1,2]

When adjusting the pH of the aqueous portion of the buffer to achieve a pH relative to a known or calculated analyte pKa (i.e. when adjusting pH to be well away from the analyte pKa), remember that the pH of the solution will change when the organic component is added.  As a very approximate rule of thumb follow these guidelines;

For acidic eluents and buffers

For basic eluents and buffers

Remember that trifluoroacetic acid (TFA) is a strong ion pairing reagent and may severely restrict the detector sensitivity in positive ion mode, because the ion pair is strong enough to survive as a neutral complex with the analyte during liberation into the gas phase.  Further, TFA is known to ‘linger’ within mass spectrometer sources and may take prolonged cleaning in order to remove it.  TFA may also form strong hydrophobic interactions with silica based HPLC columns, substantively altering the column chemistry. Many users recommend that columns used with TFA are dedicated to separations using this eluent additive.

Ammonium acetate has sparing solubility in acetonitrile and above 60% acetonitrile, vigilance is required to avoid the formation of colourless salt crystals within the eluent reservoir and inner surfaces of the HPLC equipment.

The main buffers that can be utilised as an alternative to TFA are:

Give the many unwanted characteristics of TFA, users tend to turn to alternative buffer systems, without realising that there are several higher perflourinated acids that can be used with MS detection to provide alternative selectivity. They have been widely reported in literature as long ago as 1996 [3 - 5]. 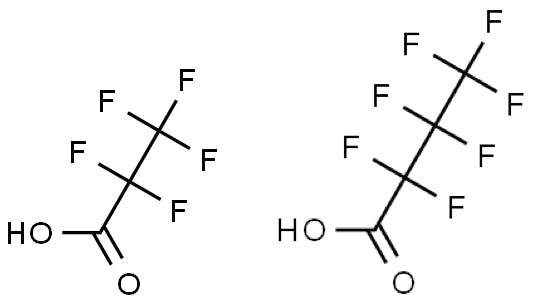 Figure 1 shows two such volatile perfluorinated acids which can be used as an alternative to TFA.  Retention time under reversed phase conditions will tend to increase with increasing ion pair chain length; however, care is required to add just enough ion pairing reagent for improved retention.  Excess ion-pairing reagent may cause retention loss due to various electrostatic effects associated with adsorption of the ion pairing reagent on the silica surface.  These additives are also ion pairing reagents but are weaker than TFA. The ion-pair tends to dissociate within the ESI source, giving rise the corresponding charged analyte in the gas phase. Hence, sensitivity of detection is not affected to the same degree as with TFA.  These reagents also linger for much shorter times within ESI sources.  Furthermore, each of these reagents will produce an alternative selectivity to the separation carried out with TFA.  The acidity of these reagents should also be noted and a stationary phase with good low pH stability should be selected.  Column washing procedures may need to be employed to remove the additives from the stationary phase surface.

We have noted, along with other literature reports [3] that the addition of the perfluorinated acids to the sample diluent can have a marked effect on the peak shape, and sometimes on the retention time stability of the resulting chromatography. Especially, when dealing with highly ionogenic compounds.

Methanesulphonic acid (MSA) can also be used as a very effective alternative to TFA when using UV detection.  It is a stronger acid than TFA and, as such, will have sufficient capacity at lower concentrations than TFA (a 3mM solution of MSA gives a similar pH to 0.1% TFA). It will also retain its buffering capacity over a wide-range of acetonitrile concentrations and has the added advantage of a UV cut-off of 195nm.  Again, MSA produces altered selectivity to TFA and there are reports that addition of MSA to TFA based eluent systems in HILIC mode can be used to ‘tune’ the selectivity in this separation mode [6].

Ammonium hydrogen carbonate is an excellent buffer for use at high-pH with good buffering capacity over pH 8-11 and possibly wider at higher ionic strength.  The extended buffering range is due to the ammonia – ammonium buffering capacity being additive to the hydrogen carbonate-carbonate capacity in what is traditionally called a ‘mixed buffer’.  That is, the pKa of the two buffering systems are relatively close. Compare this to the use of ammonium acetate or formate buffers at low pH where the buffering ranges of the ammonium species and the format or acetate are several pH units apart (see Table 1). Under these circumstances, the ammonium ion is merely acting as an MS friendly counter ion in place of sodium or phosphorous ions.  Ammonium hydrogen carbonate is MS friendly and has a UV cut-off of 190nm.

These buffers can produce somewhat unstable retention at pH 7; however, this is thought to be due to the less effective buffering capacity in the ‘valley’ region between the first and second pKa values of the buffer.  Eluents above pH 8 should produce very effective buffering.

Thinking of separations at high pH brings us to another interesting point when selecting buffers for the separation of basic analytes with MS detection.  One might expect that selecting an eluent pH in which the analyte is expected to be in the neutral form (eluent pH above the analyte pKa for basic analytes) will lead to reduced analyte detector response.  However, this has been shown not to be the case in many examples and has come to be known as ‘wrong way round’ ionisation [7,8].  This mode of ionisation is reported to be driven by process such as;

Therefore, It is incumbent upon us to explore separations involving basic analytes at high pH to gain alternative selectivity, even if this appears to be counterintuitive to theory.

One further note on MS signal intensity is the use of forced adduct formation to improve the sensitivity of the analyte, or to distinguish one analyte from another within the MS chromatogram.  Solutions of sodium or ammonium acetate (for example) can be infused into the eluent flow post-column in order to promote adduct formation, which is often attendant with an increase in analyte signal.  Typically, 1-5mM solutions are used to prevent source contamination or blockage and only the purest reagents available should be used.

Finally, one very useful eluent additive was recently reported [9] which helps overcome the effects of analyte binding to the metal surfaces within the HPLC system as well as improving the peak shape and detector sensitivity for anionic analytes. Medronic Acid (Figure 2) can be used as a very useful alternative to EDTA with LCMS analysis and has been shown to produce much lower degrees of ion suppression.

This is especially useful in the analysis of peptides and proteins and typically 5mM of medronic acid can be added to buffered mobile phase (ammonium acetate for example) to provide highly-effective ‘deactivation’, resulting in improved peak shapes, detector sensitivity, and quantitative reproducibility.

I would urge anyone developing an HPLC method to consider whether they are selecting the most appropriate eluent additive prior to commencing laboratory work and to be open to exploring buffers beyond the established norm.

On the front-line of the selectivity battle, we need to have as many weapons as possible!